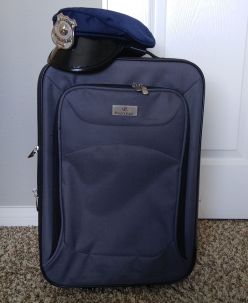 Police are often transferred from one place to another, and there could be any number of reasons for that. Sometimes it’s at the officer’s request; sometimes it’s a decision made by the ‘higher ups.’ Often, it’s benign (e.g. staff shortages). There are times, though, when those transfers really amount to exiling the officer.

It’s a common plot point in crime fiction, and it’s not hard to see why. An exile can add tension, even danger, to a plot. It can also give the author the opportunity for a ‘fish out of water’ sub-plot, or the ‘gaining the trust of a new team’ plot point, among others. So it’s not surprising that we see the exiled cop in several novels and series.

Fans of Michael Connelly’s Harry Bosch will know that he’s been exiled more than once, often because he uncovers corruption or worse in high places. We see that in more than one of the novels that feature him. It doesn’t help his case that his anger sometimes gets the better of him. For instance, in The Last Coyote, we learn that Bosch has been placed on Involuntary Stress Leave after a violent argument with a supervisor. He’s been ordered to undergo psychological treatment, and he does visit Dr. Carmen Hinojos. But he also re-opens a cold case that has special meaning for him – the murder of his mother.

In Martin Edwards’ The Coffin Trail, we are introduced to Detective Chief Inspector Hannah Scarlett. She’s been ‘promoted’ to head of the Cumbria Constabulary’s Cold Case Review Team. Scarlett knows full well that this is actually an exile because of a case that went wrong. But she puts the best face on it that she can, and tries do her job well. The cases she and her team are given are old, which means the trail has gone cold, as the saying goes. It’s expected that she won’t succeed, which will justify punishing her. But Scarlett is nothing if not determined. As the series goes on, we see how she adjusts to her role, and leads her team to finding out the truth about many of the cases they’re given.

Louise Penny’s Armand Gamache is a Chief Inspector with the Sûreté du Québec. He’s got a reputation for integrity and for solid leadership. Beginning with Still Life, we see that he has a strong sense of wanting to do the right thing, support his team members, and of course, solve cases. But his integrity gets him into trouble more than once, and he’s made the target of those who would like to sabotage him. Matters get even more serious in How the Light Gets In, when he uncovers corruption and worse at very high levels of the government and the police force. He’s forced to retire after the events of that novel, but that doesn’t mean he stops investigating (right, fans of The Long Way Home?).

Qiu Xiaolong’s series features Chief Inspector Chen Cao of the Shanghai Police Service. The series begins in the late 1990’s and shows how China has moved towards a ‘Chinese version’ of capitalism. Even so, the Party remains in control of what happens in China, and those who are highly placed and/or well-connected can often do what they want without reprisal.  That’s because the Party wants to protect itself from any hint that members may be corrupt. Chen, however, is a good cop who wants to do the right thing. He’s not naïve; he knows what happens to people who run afoul of the Party. But he is good at his job. More than once, he uncovers crime and corruption committed by very well-placed people. Finally, the ‘higher ups’ decide to get him out of the way, where he can’t do them any more damage. So, in Shangai Redemption, we learn that he has been made Director of the Shanghai Legal Reform Committee. It’s billed as a promotion, but really, it’s an exile. His office has no real authority, and although he gets more pay and benefits, and a nice office, he’s clearly been exiled to a meaningless job. He decides to find out why he’s been targeted, which leads him to some cases his office was given before he was exiled. It’s not going to be easy to find out the truth, since he has to avoid letting anyone in the Party know what he’s doing. But in the end, he finds out the truth.

In Garry DIsher’s Bitter Wash Road, we meet Constable Paul ‘Hirsch’ Hirschhausen, who’s just been stationed in Tiverton, a rural town in South Australia. He’s been exiled there because of his reputation as a ‘whistleblower’ in an internal affairs case. Needless to say, he’s treated very badly by the other Tiverton police, but he is determined to do the best job he can. So, when the body of fifteen-year-old Melia Donovan is found by the side of the road, Hirsch begins a thorough investigation. Despite sabotage by his fellow officers, Hirsch interviews witnesses, gets the evidence, and, after another murder, finds out who the killer is. It’s an ugly case, but Hirsch is committed to finding out the truth.

And then there’s Paul Thomas’ Tito Ihaka of the Auckland Police. Ihaka is not afraid to speak truth to power; and, although he’s not what you’d call tactful, he is a good cop who wants to do the right thing. In Death on Demand, we learn that he has been exiled to Wairarapa and demoted to the rank of Sergeant. It’s all because five years earlier, he accused Christopher Lilywhite of murdering his wife. Lilywhite is rich and well-connected, so he was able to escape relatively unscathed. Ihaka, though, always believed Lilywhite was guilty, and he was banished because of it. Now, though, Lilywhite has been diagnosed with terminal cancer, and wants to talk to Ihaka personally. So, Ihaka returns to Auckland and promptly gets involved in solving a series of murders that have been committed by a skilled and ruthless killer.

There are plenty of other fictional cops who’ve been exiled. When it’s done well, that scenario can be a very successful way to build suspense, add in characters and plot layers, and even provide story arcs in series. Which exiled cops have you liked best?

*NOTE: The title of this post is a line from Elton John and Bernie Taupin’s Bad Side of the Moon.

7 thoughts on “Exiled Here From Other Worlds*”