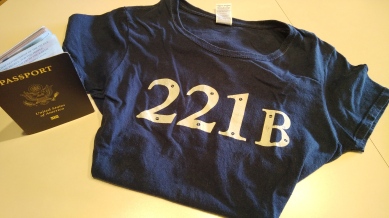 The pandemic is still very much a part of our lives, and may be for some time. But some things are opening up, and people are beginning to dream about travel again. For the crime fiction fan, there are any number of crime fiction-related places to visit and tours to take. So, let’s spend a few minutes today and think about places we might like to go to feed the crime fiction fan within us.

Perhaps the most iconic address in crime fiction is 221B Baker Street, made famous of course by Arthur Conan Doyle. For the mystery fan, a visit to London wouldn’t be complete without a visit to that famous address. While you’re there, you can visit the Sherlock Holmes Museum. There, you’ll get to see a re-creation of Holmes’ study and of Dr. Watson’s rooms. You can also take a Sherlock Walking Tour, which lets you visit some of the places that figure largely in the Holmes stories. There are other options, too, for the Holmes enthusiast. Grab your deerstalker hat and pipe – the game is afoot!

Another very famous location in crime fiction is the world-famous Venice-Simplon Orient Express. Agatha Christie’s Murder on the Orient Express highlights that train. It tells the story of the murder of Samuel Ratchett, which takes place onboard the Orient Express during its three-day trip through Europe. For many people, the train itself is almost a character in the novel. Certainly it’s an important part of the film adaptations. For many years, the train line was closed, but it re-opened in 1977, and now offers a unique travel experience. The train is done in the Art Deco style, and passengers get a chance to see a bit of Europe and get a real-life feel for the way the characters in the novel travel. I have to admit, this trip is definitely on my ‘bucket list.’ I’ll just try to go during the summer, when it’s less likely that the train will become snowbound…

The brownstone owned by Rex Stout’s Nero Wolfe is another iconic crime-fictional location. Wolfe seldom leaves the brownstone, so most of the stories take place there, at least in part. Fans can give you all the details about the size of the building and its layout. The exact building is fictional, but the Wolfe Pack – the official Nero Wolfe literary society – did some figuring and worked out which building it would have been. They lobbied successfully to have the building designated as an official historic site, complete with plaque. If you’re in New York, you can visit the building, take walking tours, and otherwise immerse yourself in all things Wolfe, courtesy of the Wolfe Pack. Here’s an interesting article about the group’s effort to protect the building.

Dennis Lehane’s Shutter Island introduces readers to US Marshal Teddy Daniels, and his assistant, Chuck Aule. They travel to the Ashecliffe Hospital for the Criminally Insane, which is located on Shutter Island, off Massachusetts’ Outer Harbor. They’re there because Rachel Solano, who is considered extremely dangerous, has escaped from the prison, and is loose somewhere on the island. There’s more to the hospital and the island than it seems, though, and all sorts of dark goings-on are revealed as the two men search for Rachel. One of the important aspects of this novel is the atmosphere of the hospital. It’s grim, dark, and eerie. The hospital in the book was very like Massachusetts’ Medfield State Hospital, and that was actually the location for the filming of the adaptation. If you’re interested in a different – almost macabre – sort of tour, you can visit the hospital and walk through the grounds. You can’t go in the buildings, but it gives a real sense of what Shutter Island must have been like.

And I couldn’t see myself doing a post about famous places in crime fiction without mentioning Three Pines, the small Québec town that’s the hub of Louise Penny’s Armand Gamache novels. Over the years millions of fans have fallen in love with the town and its people. Three Pines is fictional, but it was inspired by the real town of Knowlton, in Québec’s Eastern Townships. A visit to that area gives Penny fans the chance to enjoy all things Three Pines. There’s a bookshop (just like Myrna’s in the series), a café, and a lot more to enjoy. If you really want to immerse yourself, you can enjoy a Three Pines Tour, where you get to see a wide variety of locations that inspired several of Penny’s novels.

See what I mean? There are so many great places for crime fiction fans to indulge their interest. Hopefully we’ll get the chance to visit some of them soon. Until then, at least we have the books to take us there vicariously. Which iconic places would you like to see?

*NOTE: The title of this post is a line from Billy May’s Come Fly With Me.