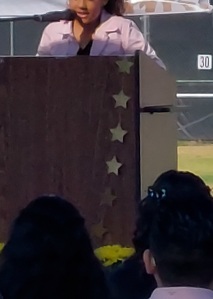 Research has shown convincingly (at least to me) that young people do best if they have the chance to enjoy their youth and aren’t pushed into the spotlight too young. Fame and fortune are alluring goals, but young people who ‘have it all’ too soon in life often run into difficulty later. We’ve all heard stories of child stars who had mental, emotional, and other problems because they had too much too soon. It’s a lot to ask of anyone to handle the responsibility that comes with fame, let alone a young person who’s not done maturing. There are characters like that in crime fiction, too, and they can be interesting in their own right; they can also be part of an engaging plot.

For instance, in Agatha Christie’s Five Little Pigs, Carla Lemarchant hires Hercule Poirot to find out who poisoned her father, famous painter Amyas Crale. It won’t be an easy case; Crale was poisoned sixteen years earlier, and his wife Caroline was arrested, tried, and imprisoned for the crime. She died in prison, but Carla has always believed she was innocent. Poirot takes the case, and he interviews the five people who were on the scene in the days leading up to the murder, and on the day of the murder itself. It turns out that each one of them had a motive for murder. One of those people is Lady Elsa Dittisham. At the time of the murder, she was barely twenty, and staying at the Crale home because Crale was painting her portrait. She was having a not-very-well hidden affair with him, too, and it’s believed that was the reason Caroline Crale killed her husband. As Poirot learns more about the case, and talks with those involved, we see just how young Elsa was. At only twenty, she was having a much-discussed affair with a famous person. It would have been a lot to manage at any age, but she was muchyounger, both chronologically and emotionally, than she admitted.

Elizabeth George’s A Traitor to Memory is, in part, the story of twenty-eight your old Gideon Davies, a violin virtuoso. He’s got a rare gift, and he’s spent most of his life honing his considerable talent. One day, to his sad shock, he finds that he cannot play. It’s the only thing he’s ever known, so of course, he wants to find out why he can’t play, and to solve his problem. He embarks on a course of psychological therapy to find answers. In the meantime, his mother, Eugenie is killed in what looks like a tragic hit-and-run accident. But is it an accident? Inspector Thomas Lynley and Sergeant Barbara Havers are assigned to investigate the case. It turns out that this death is connected to Gideon’s inability to play, and to the tragic drowning of Gideon’s younger sister Sonia twenty years earlier.

In Megan Abbott’s You Will Know Me, we are introduced to Devon Knox. She has a gift for gymnastics, and her parents, Katie and Eric, want to nurture that talent and give their daughter everything they can. So, when they meet Teddy Belfour, a gymnastics coach who owns his own program, they’re only too eager to listen to what he has to say:

‘Bring her to BelStars [his program] and she’ll find the extent of her power.’

Then, there’s a tragic accident (or was it an accident?) that changes everything. As the novel goes on, we see how gifted Devon is. With the right coaching, she’s definitely good enough for the Olympics. She’s very young, though, to handle all the attention and the challenges that go with Olympic fame. That’s not to mention the physical toll that gymnastics training takes on her body.

Harlan Coben’s Myron Bolitar novels also often feature gifted athletes who are young and possibly too immature to handle the pressure of fame. Bolitar is a former basketball star-turned-agent, so he sees many young people who ‘make it’ as athletes in their teens and early twenties. That’s what they do and that’s what they have. So, when the cheering stops, it can be hard for them to decide what to do next. More than that, there are a lot of legal, financial, and logistical decisions for them to make. And in many countries, they’re legally allowed to do so without an adult’s consent/participation at the age of eighteen (or in some cases, twenty-one). That’s awfully young to manage the realities of a very lucrative contract. And being thrust into the spotlight doesn’t help matters.

Gail Bowen’s Joanne Kilbourne Shreve is a retired academician/political scientist. She and her husband Zack are also the adoptive parents of Taylor, who is a gifted artist. Taylor’s been creating art since she was a little girl, so her parents are well aware of her talent. She’s had more than one opportunity, too, to become a very public figure with her work. But she is also young. Both of her parents want her to have as normal a childhood as possible, and that means keeping her out of the limelight and letting her be, well, a child. At the same time, they both know how gifted Taylor is and how much her art means to her. They don’t want their daughter to miss out on the chance to use her natural talent. So, it’s often a balance for the Shreve family: make sure Taylor explores her art, while at the same time protecting her as best they can.

It is a challenge to ‘make it’ at a young age. Most young people aren’t mature enough to handle the pressure of being famous, or of having rare gifts, or of having a fortune. It’s hard enough for mature adults to deal with the complications; it’s even more difficult for young people.

*NOTE: The title of this post is a line from Andrew Lloyd Webber and Tim Rice’s High Flying, Adored.