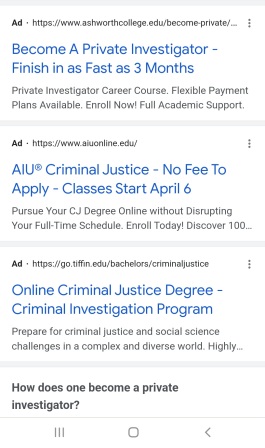 Plenty of crime-fictional private investigators come from police backgrounds, and that’s a natural progression if you think about it. There’s a long list of them; two are Lawrence Block’s Matthew Scudder, and Anthony Bidulka’s Russell Quant. Others, like Cara Black’s Aimée Leduc, are the children of private investigators. Again, it’s not too surprising that they’d take up a parent’s business. Some PI’s, though, don’t come from traditional police backgrounds or PI family backgrounds. Some of them come from quite different backgrounds, and it’s interesting to see how they move to their new careers.

For example, Walter Mosley’s Ezekiel ‘Easy’ Rawlins didn’t set out to be a PI. He worked in an airplane factory during World War II, when planes were essential to the war effort. After the war ended, though, demand went down, and Rawlins lost his job. He didn’t lose his bills, though, so he needed to make money. Then (read about it in Devil in a Blue Dress), he was hired to find a missing woman. He wasn’t hired because of his ‘track record,’ though. He was hired because he is Black (in post WW II Los Angeles), and therefore, wouldn’t call attention to himself in the area where she went missing. It turned out that he’s good at his job, though, and has gotten a reputation for being able to find people.

Jacqueline Winspear’s Maisie Dobbs didn’t plan to be a PI, either. She started out in domestic service and might very well have stayed in that position. But her employer saw that she was highly intelligent and a quick learner. So, she was sponsored and educated. Then, when WW I broke out, she went to the front as a nurse. When the war ended and she returned to England, it was to a completely changed society. With the help of her mentor, she studied psychology and became a private investigator. Maisie’s background may not be in law enforcement, but she uses her knowledge of psychology and her wartime experiences as resources.

Leigh Redhead’s Simone Kirsch is a Melbourne-based PI. She is also a former stripper who still takes on strip jobs from time to time. She knows that strippers usually have limited career spans and had actually decided to become a police officer. But her stripping background prevented her from getting hired. So, she did what, to her, was the next best thing. She became a licensed PI. Her background has given her access to a lot of people in many facets of Melbourne’s sex trade, and that’s helpful as she does her job. At first, it’s not easy to build her business, as most people know her in another capacity. But she’s good at what she does, and word gets around about her.

Jill Edmondson’s Toronto-based Sasha Jackson has also had to build up her business. She started out in a rock band (she still jams with them at times), but the life got to be a bit much for her, and it didn’t help that she ended a romantic relationship with one of the band’s other members. That’s when she turned to the PI business. Her rates are low, but it still takes time and effort to get a clientele. So, until the business really takes off, Sasha has a night job as a phone sex worker. It pays the bills and it’s safer than doing the work in person. She also does occasional other temporary work, like bartending. Sasha’s good at what she does, and, little by little, she starts to attract PI clients. And her connections (and her friends) help her to talk to the people she needs to meet and find the answers she needs.

More recently, Doug Johnstone has created a series featuring the Edinburgh-based Skelf family. The Skelfs own a funeral home business, which is their regular income. But when family patriarch Jim Skelf dies (in A Dark Matter), life changes dramatically for his widow Dorothy, daughter Jenny, and granddaughter Hannah have to take over the business. They also take over the other Skelf family business: private investigation. While they’re familiar with the funeral business, none of the women has done private investigation before; it was something Jim did. But They’re smart and resourceful, and they soon find that they can solve cases. Funeral home work and private investigation may seem like an odd combination, but they’re actually more closely related than you might think, and it’s interesting to see how the Skelf family manages both of their businesses.

It’s logical that a former police officer would move to PI work; they’re very closely related professions. And it makes sense that someone whose parent is PI might take up that work. But not all fictional PIs come from those more traditional backgrounds. And it can be really interesting to see how they move from all sorts of different jobs into private investigation. These are just a few examples; I’m sure you can think of a lot more.

*NOTE: The title of this post is a line from the Smithereens’ Something New.