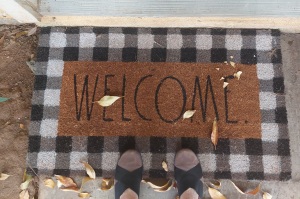 As this is posted, it’s 96 years since Agatha Christie went mysteriously missing for 11 days. No-one really knows exactly what happened to her during those days, although we do know a few things. And, as private a person as she was, my guess is that Christie was pleased that the public didn’t get all of the details. People sometimes do go missing and then come back, and it can make for major headlines if the press follows the case.

It happens in crime fiction, too. In Christie’s At Bertram’s Hotel, Miss Marple goes to London for a two-week holiday at the posh Bertram’s Hotel. There, she gets mixed up in, among other things, a plot involving theft, and the mysterious disappearance of a clergyman. It seems that Canon Pennyfeather, who’s a little absent-minded, was supposed to attend a conference in Lucerne. He gets the date wrong and finds that his ticket cannot be used. He returns to the hotel only to end up going missing for four days. It turns out that he was attacked and had a concussion, which left him unconscious. He has little memory of what happened, but what he does recall is helpful to Miss Marple and Chief Inspector Davy as they piece together what’s really going on at the hotel.

Ruth Rendell’s Simisola begins when Dr. Raymond Akande becomes worried about his 22-year-old daughter Melanie. She’s been gone for two days, and hasn’t been in touch, which isn’t like her. He tells one of his patients, Detective Chief Inspector Reg Wexford, about his concerns. At first, Wexford thinks there may be nothing to worry about. After all, there’s nothing inherently bad about a young woman going off for a few days without necessarily telling her parents where she’s going. But Akande insists that Melanie wouldn’t do such a thing. Wexford agrees to look into the matter, but nothing comes up – until the body of a girl is found in a nearby wood. Wexford believes it’s Melanie’s body, but it turns out he’s wrong. Now he’s got two mysteries to solve: where is Melanie and who is the dead girl (and who killed her)? Melanie is found, but in a way that only deepens the mystery, since it completely changes Wexford’s view of the cases he’s working.

Reginald Hill’s Child’s Play concerns the will of wealthy Geraldine Lomas. Her wish was that her considerable fortune would go to her son, who’s been missing since WW II. Everyone presumes he’s dead, but her will stipulates that, if he returns or can be found before 2015, he will inherit everything. Oddly enough, a strange man shows up at her funeral, calling her ‘Mama,’ and insisting he’s her son. Then, a few days later, he’s found dead in a car. Now, Superintendent Andy Dalziel and his team will need to find out whether the dead man was, in fact, Geraldine Lomas’ son. If he was, where has he been for so long? And in any case, who killed him? It’s a trickly puzzle that links past and present and shows what happens when someone everyone thinks is gone…doesn’t seem to be.

In Håkan Östlundh’s The Intruder, well-known food blogger Malin Andersson and her husband, professional photographer Henrik Kjellander, are returning to their home on Fårö after a two-month absence. With them are their two children, Ellen and Axel. When they get to their house, they see that it’s a mess. Trash is everywhere, and at first, it looks like a case of horrible tenants (they’d rented their home out while they were away). But then, they discover that some of their family photographs have been mutilated in a deliberate piece of destruction. Sloppy tenants wouldn’t do that. The family contacts the police and detectives Fredrik Broman and Sara Oskarsson start investigating. They’re just getting underway when Ellen goes missing. It’s thoroughly frightening, and the police start a major search. Thankfully, Ellen returns safely, but she has a strange story to tell about a ‘nice woman’ who picked her up in a car. That story ends up being a piece of the puzzle surrounding what happened to the family’s home. And it turns out that this family is in grave danger.

And then there’s Dennis Lehane’s Mystic River. Sean Devine, Jimmy Marcus, and Dave Boyle are good friends, although they’re not all from the same proverbial side of the tracks. Then one day, a car pulls up to the street where the boys are spending time. The driver claims to be a plainclothes detective, and orders all three boys into the car. One of the boys gets into the car; the other two don’t. The car pulls away, and the boy doesn’t return for four days. When he does, everything changes for all three boys. We see this even years later when the three boys are adults. Now, Sean’s a police detective, Jimmy is an ex-con who owns a store, and Dave is trying to keep his life and his marriage together. Then, Jimmy’s daughter goes missing and is found murdered. Sean’s put on the case, and one of his main concerns is keeping Jimmy from dispensing justice in his own way. And Dave turns out to be a suspect in the murder. Among other things, the story explores what happens when someone goes missing and then comes back. The consequences can be life-altering.

It’s always interesting, plot-wise, when a person goes missing, and later comes back. There are any number of reasons it might happen, but in the best novels, those reasons are believable and fall out from the story. There are other examples I thought of, but I have a no-spoilers policy. Do any examples occur to you?

*NOTE: The title of this post is a line from Ian Thomas’ Coming Home.