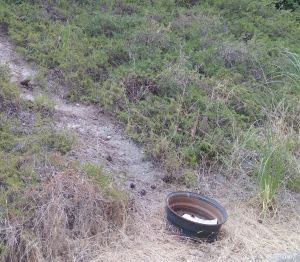 The world can be a scary place, especially when there are unsettling global events. Different people respond to that challenge in different ways, and for some people, that way is to become survivalists. Being a survivalist involves a lot more than just knowing how to light a campfire or pitch a tent. It’s a whole way of life that focuses on living off the land and on sustainability, sometimes to prepare for (or prevent) for global calamity. Survivalists can make interesting fictional characters. They tend to be thoroughly familiar with the land and the plants and animals that live there. They also often have skills like candlemaking, preserving, curing meat, and foraging that aren’t so common. And they sometimes live in closely-knit, even secretive, communities that can make for interesting crime-fictional contexts. Oh, and you’ll notice here that I’m not talking of characters such as Arthur Upfield’s Napoleon ‘Bony’ Bonaparte, Stan Jones’ Nathan Active, or Tony Hillerman’s Jim Chee. Those characters are thoroughly familiar with the rhythms of nature, but they aren’t really survivalists as I mean it here.

In Ellery Queen’s The Origin of Evil, we are introduced to survivalist Crowe ‘Mac’ MacGowan. He gets involved in a mystery when his stepfather, Roger Priam, receives a series of anonymous macabre ‘presents.’ Priam’s business partner, Leander Hill, got similar ‘gifts.’ Hill’s daughter, Laurel, is convinced that those packages led to her father’s untimely death from a heart attack, so she visits Ellery Queen, who has taken a home nearby, to ask him to investigate. At first, Queen’s reluctant to take the case; he wants to do some writing. But he is intrigued, so he begins to ask questions. One of the people he talks to is Mac, who lives in a treehouse and wears as little as possible (nothing at all if he can get away with it). He is convinced that society will be decimated by an atomic bomb blast, and that humans will have to start over. So, he is preparing for the worst. Mac’s views are not the reason for Leander Hill’s death, but they make him an interesting character.

In John D. MacDonald’s The Green Ripper, ‘salvage consultant’ Travis McGee is devastated when his beloved girlfriend Gretel Howard dies of a mysterious illness. It turns out that she was murdered, and McGee is determined to track down whoever is responsible. The trail leads to a Northern California group called the Church of the Apocrypha. This group believes that society is doomed. The only way to save humanity, according to the group’s beliefs, is to tear down existing social structures. McGee infiltrates the group, putting himself in real danger, to find out why they would target Greta. It’s an interesting look at a doomsday cult, if that’s the term.

C.J. Box’s Endangered sees Wyoming game warden Joe Pickett coping with several cases at once. One of them – one that hits very close to home – is the abduction of his foster daughter, April. When she is found, badly injured but alive, by the side of the road, Pickett wants to catch whoever was responsible for taking her. April is in a coma, so she can’t be much help. And in any case, she may not be able to remember enough about the incident to give a lot of information. So, Pickett goes on his own search. One possibility is April’s ex-boyfriend, but he claims to be innocent. What’s more, anonymous tips point to a survivalist named Tilden Cudmore. Cudmore lives alone in a ‘ramshackle double-wide trailer’ surrounded by broken-down vehicles, dire warning signs to stay off the property, and other unsettling objects. Cudmore poaches or forages for food, is opposed to government, and would just as soon shoot a police officer as talk to one. Pickett knows it’ll be difficult to get Cudmore to talk, but this is about family, so Pickett is willing to do whatever it takes to find out what he wants to know.

Stina Jackson’s The Silver Road tells two stories, both of which take place in and around the small Swedish town of Glimmersträsk. One is the story of Lennart ‘Lelle’ Gustafsson, a maths teacher whose daughter Lina went missing three years earlier when she was seventeen years old. He’s been out nearly every night looking for her since then, and is obsessed with finding her. The other is the story of seventeen-year-old Meja, who’s just moved to the village with her mother Silje. They’re hoping to make a fresh start with Silje’s new lover, but Meja is cynical about the whole thing; she’s seen this scenario too many times, and moved too often, to really think things will work out. Then, she meets Carl-Johan Brandt, who lives with his parents and two brothers. The Brandt family is a survivalist family. They grow their own food, have their own animals, and work their own land. The parents don’t believe in modern communication like smartphones, because they are convinced that’s how the government monitors citizens. It’s an eccentric family, and through its members, Jackson shows how survivalists go about their lives in this age of social media. The two stories come together as the novel goes on, and we see the impact of Lina’s disappearance on several characters.

There’s also David Whish-Wilson’s True West. As the novel begins, seventeen-year-old Lee Southern is driving his father’s truck towards Perth, where he’s hoping to start a new life using the truck to rescue stranded motorists. Lee’s father Jack is a survivalist, so Lee has learned all sorts of tricks for staying alive, avoiding detection, finding food, and sheltering himself. He’s going to need every one of his skills, too. For one thing, he’s trying to outrun a gang who is very likely looking for him. For another, he soon learns that the Perth towing business is already under the control of some very nasty people who do not want to share the takings.

Survivalists are often thought of as eccentric, even weird. But they can be very interesting as fictional characters, and they can play important roles in crime novels. Which ones have stayed with you?

*NOTE: The title of this post is Baron Von Bear’s Live Off the Land.