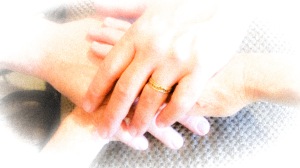 As this is posted, it’s Halloween. Even if you don’t celebrate, I’ll bet you’ll agree that it touches a nerve with a lot of people. One of the themes that always seems to come up at this time of year is communicating with those who have passed away. For many, the prospect of communicating with someone who has died is irresistible. It may be because of grief for a lost loved one, or it may be curiosity. It may be for other reasons, too, but whatever the reason, plenty of people would like to be able to reach out to those who are gone. In fact, that connection is an important part of Día de los Muertos (Day of the Dead) which is celebrated on 1 and 2 November.

In some cultures, the dead are always present in the metaphysical sense. So communicating with them isn’t particularly strange. But in other cultures, it’s not so easy to do. People use Ouija boards, attend séances, consult mediums, and do other things to try to reach out to the dead. And that combination of curiosity, eeriness, and speculation can add much to a crime story.

In her short story The Last Séance, Agatha Christie introduces a successful medium named Simone. She is exhausted from the work, and ready to be done with it. But she has agreed to do one last sitting. Madame Exe is desperate to stay in contact with her dead daughter Amelia, and she has insisted that Simone help her. At first, Simone plans to send her regrets and not do the sitting. But her fiancé persuades her to go through with it, and Simone agrees, albeit reluctantly. Madame Exe arrives, and the séance begins. As the story goes on, we see the tragic result of Simone’s decision.

In Hake Talbot’s Rim of the Pit, a family gathers for a weekend at Cabrioun, the New England property of Irene Ogden. She and her current husband Frank are planning to host a séance. And that’s not as odd as it seems. First, Irene is a medium, and she and Frank believe in spiritualism. Also, it seems that Irene’s former husband Grimaud Désanat owned some land on which grows a particular species of tree that’s essential to the family business. Before he died, Désanat specified that this land was not to be logged for twenty years. But the business is struggling, and those trees are needed. So, Irene, Frank, and family friend Luke Latham decide to have a séance to contact the dead man and ask his permission to use the land. The séance is duly held, and extremely eerie. Some strange events happen, and everyone is a little unsettled. Then, Irene is exposed as a fake. Later, she is found dead. Now the group has to find out who the killer is before anyone else is killed.

Caroline Graham’s Detective Chief Inspector (DCI) Tom Barnaby gets a strange case in A Ghost in the Machine. In it, financial advisor Dennis Brinkman is found dead near one of the medieval war machines he collected. At first, it looks as though he died by accident. But his friend Benny Frayle believes otherwise. She goes to the police with her concerns, and Barnaby agrees to look at the case. But he can’t find anything amiss. It seems that the police did their jobs thoroughly and well. Still, Benny remains unconvinced. She attends a séance hosted by self-styled medium Ava Garrett, to see if she can contact her friend, or at least get answers about his death. At the event, Ava shares some very specific information, and now Benny is surer than ever that this is a case of murder. And when Ava herself is killed, Barnaby comes to the same conclusion. Now, he and Sergeant Gavin Troy have two murders to investigate. Throughout this novel, there’s an interesting discussion about people’s belief in séances and mediums.

Fans of Peter James’ DCI Roy Grace will know that there’s a story arc in these novels that concerns Grace’s wife Sandy. Eight years before the beginning of the series, Sandy disappeared. No trace of her has ever been found – not even a body. And after all this time, Grace has been advised to move on. On one level, he has. As the series goes on, he finds a loving partner, has a child, and so on. But he wants very much to learn what happened to Sandy. So he consults a medium periodically, and it’s interesting to see that duality of pragmatic policing and the exploration of spiritualism. As it turns out, Grace also gets some help from this medium on some of his cases, too.

And then there’s Cat Connor’s Ellie Conway Iverson. She’s an FBI agent (later Supervising Special Agent and then Special Agent in Charge). In the course of the twelve novels that feature her, Iverson has lost more than one colleague, friend, and partner. She’s had to deal with the grief, and Connor doesn’t make light of that. Iverson misses those people, but she is at times able to communicate with them. She doesn’t do it in a ‘typical’ way, with a séance, or visits by what we traditionally think of as ghosts. But they are very real to her, and she interacts with them. Connor weaves this into the stories in a matter-of-fact way, and it doesn’t overwhelm the mystery/thriller plots of the books. It is an interesting aspect of Iverson’s character, though.

A lot of people (Arthur Conan Doyle was one of them) are fascinated by the thought that we could communicate with those who’ve died. On the one hand, it’s a natural part of human curiosity. On the other, it’s an opportunity for the unscrupulous to take advantage of people who are grieving. But that’s the stuff of another post…

*NOTE: The title of this post is a line from James’ All I’m Saying.

8 thoughts on “Holding a Séance*”