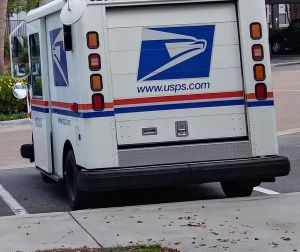 Every day the mail arrives at exactly eleven o’clock. You can set your watch by it. Paula’s truck pulls up, she gets out with the trays of letters and the packages, loads them on her handcart, and puts everything in everyone’s letterbox. Then she puts the packages in the package lockers. It’s a lot of work, but Paula always has a smile.

That’s one thing I like about her. She’s always upbeat and friendly. I also like it that she really gets to know her customers. There are a lot of us who live in this apartment community, but Paula knows almost all of us. Whenever she sees me, she asks how I am, and how Ben is. Ben would appreciate that. I haven’t told Paula about Ben, of course, and I usually just say, ‘We’re fine,’ and change the subject. It’s nice of her to take an interest.

Paula’s very helpful, too. When we moved from another apartment in the community to this one, she simply started putting our letters and packages in our new letterbox. No questions, no problem. I thought that was very kind of her.

The other morning, I went down to the mail room, and there Paula was, sliding the letters into everyone’s boxes.
‘Well, hi,’ she said when she saw me.
‘Hi, Paula.’
‘I’m just about done, if you want to wait for a minute.’
‘OK.’ We chatted for a moment or two about this and that. Then she said, ‘How’s Ben doing?’
‘He’s fine.’
‘I haven’t seen him lately.’
‘He’s out of town for a couple of days.’ I didn’t like the way she looked at me when I said that, but I didn’t want to say anything. After all, Paula’s really nice, and she does her job well. Besides, she knows everyone around here. I wouldn’t want her to start gossiping about me being rude, or something being wrong with me. Still, it bothered me. I mean, what Ben does or doesn’t do isn’t her business.

Anyway, she couldn’t possibly understand about Ben. She doesn’t really know him. Oh, yes, everyone loves how friendly Ben is, and how helpful he can be. ‘You’re so lucky,’ they say. Yeah, well, they’ve never had to clean up after him, or hear endless stories about his precious car. And I swear if I’m ever forced to watch one more stupid reality TV show, I’ll scream. I mean, how much can a person be expected to take?

So, back to Paula. As I said, she’s a very friendly person, and we’ve always gotten along. And she is very dedicated. Once, a package for me had the wrong address on it. But Paula saw my name on the label, and made sure that it got delivered to me. Wasn’t that nice of her? I just wish she were a little less chatty sometimes. Yesterday, for instance, I went down to get the mail, and she was there. I wasn’t in the mood for conversation, but she saw me, so I didn’t have much choice.

‘Hi, there,’ she said.
‘’Morning, Paula,’ I answered.
‘How’s it going?’
‘I’m good. You?’
‘Doing good. Hey, I meant to ask you, when’s Ben coming back?’
‘A couple of days.’
‘Where’d you say he went?’
‘Um, L.A. – business trip.’
‘Oh, nice.’
Yeah, very nice. Nice for him, that is. For Ben, business trips have always meant a great hotel, plenty to drink, and lots of evening company. ‘Well, it was for work,’ I shrugged.
‘I’m done with your building’s mail if you want to get yours.’
‘Thanks.’
‘Oh, and there’s one registered letter. You’ll need to sign for it.’ I took the epen she held out, and squiggled my signature on the pad. Then she handed me a letter with an embossed stamp. ‘Looks important,’ she commented. Why the hell did she have to see that letter from the insurance company? She was going to want to hear the details.
‘Just doing some retirement planning,’ I answered. Well it wasn’t really completely a lie. Not really.

I finally managed to free myself from that conversation and hurried upstairs to our apartment. I tore open the letter. Good! It was just what I’d hoped. I’d been named as Ben’s sole beneficiary. Now I could start making plans. Then it hit me. Paula. She could be a big problem. Or was I being paranoid? I mean, I’m not usually the paranoid type. But this was different. This was big. On the other hand, Paula’s a great person. And she’s a real professional. I like her. Maybe there’s not going to be any problem at all.

For about half an hour, I sat on the dark-brown recliner I use for a reading nook. I thought about Ben. About what had happened. I know nobody saw us that night. We went up to the lake and had a moonlight picnic. Ben never suspected a thing. It was perfect. And they’re never going to think of looking in that lake. It’s just that Paula’s pretty smart. And inquisitive. I finally decided I was going to have to do something about it.

This morning, I chose my time carefully. I was in luck. There was Paula, delivering the mail. Like I said, you can set your watch by her.
‘Morning,’ she smiled when she saw me.
‘Hi,’ I waved. ‘You done yet?’
‘Not for another half hour. Sorry.’
‘No problem at all.  Hey, I was wondering. What time do you finish?’
‘About five.’ Her brow wrinkled a bit. ‘Why?’
‘Oh, I just wondered if you’d like to go get some coffee or something. On me, of course. It’s just, you always do so much for us.’
Her smile was a sight to see. ‘That’d be great! Thanks! That’s really nice of you. Besides, it would be good to catch up.’

I did not like the tone of her voice. And her smile started to look sneaky. But that’s OK. I’ll be ready. Just like I was ready for that last picnic I had with Ben. I’ll just have to remember to bring my secret ingredient along when Paula and I meet later. It’ll go nicely with her coffee.

16 thoughts on “The Extra Mile”