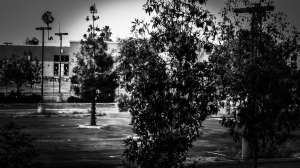 ‘What are you looking at?’ Neil asked.
‘Nothing,’ Maddie shrugged a little. Neil nodded and went back to watching TV. After a minute, Maddie looked out the window again. It wasn’t a great view – an abandoned YMCA building with a huge empty parking lot. Leaves and crumpled-up paper bags skittered across it in the breeze, and tufts of weeds pushed their way up through cracks in the surface.

Neil got up and came around behind Maddie. ‘What is so interesting?’
‘Nothing. It’s just…a little creepy, that’s all.’
‘I don’t see any ghosts,’ Neil joked. Maddie pushed him. ‘But seriously,’ he went on, ‘What’s so creepy about it?’
‘I don’t know. It’s just – not the view I’d have wanted from our window, that’s all.’
‘It’s not going to be forever,’ Neil reassured Maddie.
‘I know.’ Maddie patted Neil’s arm and moved away from the window. No use making him feel bad about where they were living.

‘Oh, hey,’ Neil reminded Maddie as she walked past him, ‘Don’t forget Brad and Jacob are coming by later.’
“Right, of course. They’re helping you to move Gary. I hope it won’t be too hard a job.’
‘Shouldn’t be. Not with three of us there to pitch in.’
‘Let me know if you need anything from me.’
‘We’ll probably be back late, tired, and hungry.’
‘Got it. I’ll leave something out for you.’
No wonder Neil loved Maddie.

That evening, Maddie caught herself looking out the window at the parking lot again. The sun had set, and the shadows from the building stretched across the lot, spreading the darkness across it as they moved. There were only two working streetlights there, so Maddie couldn’t be sure, but it looked as though something was moving. Maybe it was just the wind moving a tree limb or something. No, it was definitely something else.

‘Hey, Neil,’ she called out. ‘I just saw a car pull into that parking lot.’
‘So?’ Neil’s muffled voice drifted over to her. ‘It’s a parking lot. That’s where cars go.’
‘To an abandoned place? That doesn’t make sense. I think something’s going on there.’
Neil came into the room and glanced out the window. ‘So, there’s a car there. It’s either kids getting high or kids wanting to screw. Either way it’s nothing to worry about.’
‘Yeah, I guess you’re right,’ Maddie admitted. ‘It just looks…wrong somehow.’
‘Stop worrying, OK?’ Neil dropped a kiss on the top of Maddie’s head.

It didn’t help much. Every time Maddie looked out the window, the car was still there. Nobody was getting out of it, but it unnerved her. What if someone were watching her? She’d heard the stories just like everybody else. And she didn’t really know anyone around here. Nobody, anyway, that she could go to for help if she needed it. Still, she tried to be a grownup about it. After all, Neil was right; what was wrong with a car being in an empty lot? Besides, there was enough to do without getting paranoid about things. They were moving Gary tonight, Brad and Jacob would be there soon, and Maddie didn’t want to be up late making food. But her eye kept getting drawn back to that eerie parking lot with the car in it.

When Brad and Jacob got there, Neil sat with them for a few minutes, talking about the details of the move. Then, he went and found Maddie to tell her they were leaving. ‘We’ll be back at some point,’ he promised.
‘I hope it goes well,’ she answered.
‘Me, too.’ He kissed her and they left.

Leo and Nate sat in the car, watching the apartment. Neither of them really felt like being out tonight, but that was what the boss had told them had to be done. Nate took a bite of the burger he was eating. ‘You think this is the right night?’ he mumbled through the food.
‘Boss says so. And it makes sense.’
‘Yeah, I guess so.’  They watched the place for a few minutes more. All of a sudden, Leo noticed some movement. He nudged Nate. ‘I think they’re leaving.’
‘Let’s go.’

Maddie watched through the window as Neil, Brad, and Jacob walked towards Neil’s car. Wait a minute! There was a light from the car in the abandoned parking lot! Yes, there was someone there, and it looked like the car was leaving. She kept watching as the car turned around and headed towards the exit. A minute later, she saw the car pull up the narrow lane towards their building. She chewed on her lower lip as she watched the car stop. What did that guy want? No, wait – there were two. Were they coming here? Was she being stalked? Maddie wanted to scream out the window to warn Neil, but it was too late.

Neil looked up as Leo and Nate approached him.
‘Neil Bartels?’
‘Yeah, why?’
‘We have a warrant to search your car. Please stand back.’ Nate moved between Neil and the car while Leo waved Brad and Jacob away with his service weapon. Once Neil was far enough back, Nate opened the trunk of the car. He called out to his partner. ‘Here he is.’ Then he looked at Neil. ‘You’re under arrest for the murder of Gary Dortman.’

Maddie watched through the window as two other police units pulled up and took her husband and his friends away. She felt bad about Gary. He was a nice enough guy. But he wouldn’t keep his nose out of Neil’s business, even after they’d warned him.  Still, she wished she’d trusted her instinct about that parking lot.