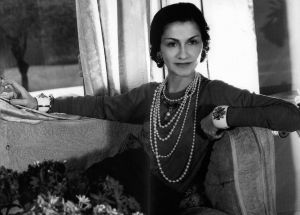 As this is posted, it would have been Coco Chanel’s 138th birthday. As you’ll know, she was one of the influential designers of the 20th Century. She was also an independent businesswoman at a time when that wasn’t as common as it is now. Two of her most famous innovations were the ‘little black dress,’ and the Chanel suit, both designed for the increasingly independent post-WW I woman. And, of course, there was the perfume.

There’ve been lots of other famous designers, too, and that makes sense if you think about just how good it can feel to wear that perfect suit, that special pair of shoes, or that trousers-and-blouse combination that makes you feel like a supermodel. And it’s not just women, either, who enjoy that ‘perfect outfit’ feeling. It’s a very, very lucrative business.

It shouldn’t be any wonder, then, that famous fashion designers would show up in crime fiction. After all, fictional characters want to look good, too. In Agatha Christie’s Evil Under the Sun, for instance, we are introduced to Rosamund Darnley. She is a very successful, independent dress designer who’s very proud of her brand, Rose Mond. She’s decided to take a holiday at the Jolly Roger Hotel, on Leathercombe Bay. What starts out as a peaceful trip soon becomes anything but. First, to her great surprise, her old friend (and former love interest), Captain Kenneth Marshall, comes to the hotel with his wife, Arlena, and his daughter, Linda. Then, a few days later, Arlena is found strangled at Pixy’s Cove, not far from the hotel. Marshall is the immediate first suspect, but there are other possibilities, too, including Rosamund Darnley. Hercule Poirot is also staying at the hotel, and he works with the police to find out who the killer is.

Ellery Queen’s The Fourth Side of the Triangle features famous clothing designer Sheila Grey. Not only is she successful, but she’s also an independent woman who has no particular desire for marriage, which she feels would be too confining. As the novel begins, she has a relationship with a businessman named Ashton McKell. When McKell’s son, Dane, discovers that his father is seeing someone else, he’s determined to find out who it is. He follows his father one night and ends up meeting Sheila. The two get to know each other and are soon involved. Not long afterwards, Sheila is murdered. Inspector Richard Queen investigates, and of course, his son Ellery takes part. The McKells come under their share of suspicion, but it turns out that they aren’t the only ones with a motive to kill. Among other things, this novel has some interesting commentary on being an independent woman at a pivotal time (1965).

The world of fashion is central to Mary Higgins Clark’s While My Pretty One Sleeps. Neeve Kearny owns a high-end New York City boutique, and she’s very much hoping to make her name in the fashion world. She has several wealthy and well-placed customers, and she’s good at what she does, so she’s optimistic. Then, one of her exclusive clients, newspaper columnist Ethel Lambston, goes missing and is later found dead. Neeve finds herself drawn into the investigation, especially when she makes sense of an important clue. But that only draws her into danger as the killer finds out that she knows more than is safe. And it turns out that this murder is related to something from Neeve’s own past.

Kwei Quartey’s Sleep Well, My Lady is the story of Accra-based fashion designer Lady Araba. An independent and successful woman, she’s made quite a name for herself, and is now head of a fashion empire. She’s also the partner of talk show host Augustus Seeza. When Lady Araba is murdered, the police investigate and quickly come to the conclusion that the murderer is the victim’s driver. He’s arrested and imprisoned without going through the usual procedures, and the police want to call the case closed. But Lady Araba’s Aunt Dele is certain that Seeza is the murderer. When nothing is done for months, she finally goes to visit PI Emma Djan. She wants Djan to look into the matter and find out who the real killer is, as she is convinced that the driver is innocent. And it turns out that more than one person might have wanted the victim dead.

Sophie Littlefield’s Hanging By a Thread, is a YA standalone featuring fledgling clothes designer Clare Knight. As the novel opens, she and her mother have just moved back to her home town of Winston, California, a quiet beachside community. There, she and her best friend, Rachel, open a business selling the one-of-a-kind vintage clothes that Clare designs. For the past two years, a young person has gone missing during the town’s Fourth of July celebrations. One of them was teenager Amanda Stavros. When Clare finds a denim jacket that belonged to Amanda, she knows something terrible happened. Clare is a synthaesthete, who senses people’s pasts when she touches clothes they’ve worn, and holding the jacket is enough to convince her that Amanda was murdered. Now, she starts looking for the truth, and finds out that the town is keeping some dark secrets.

There is just something about a pair of perfectly designed trousers, or dress, or jacket. So, it’s no wonder that fashion design is such a profitable industry. And fashion designers certainly can make for interesting characters, just as Coco Chanel was…

*NOTE: The title of this post is a line from Justin C. Ward’s Grand Hotel.

10 thoughts on “And She Always Wore Coco Chanel*”