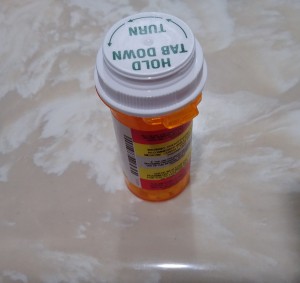 ‘Things are looking good,’ the doctor reassured Gavin. ‘Your heart function is almost where it should be, and your blood pressure has improved a lot. Your weight’s down, too.’
Gavin smiled. The heart attack had been a wake-up call to start taking better care of himself. It was good to see that his efforts were paying off. ‘So, what comes next?’ he asked. ‘Will I need more surgery?’
‘For now, I don’t think it’s necessary. I want you on a beta blocker, and it’ll be important to keep up with your diet and exercise. And I’ll want to see you again in three months to see how things are going. But I don’t see the need for a hospital stay right now.’
‘That’s great!’ Gavin smiled again as he got off the examination table. The doctor said his goodbyes, and then directed Gavin to the reception area to make a follow-up appointment. When that was settled, the receptionist told him, ‘We’ll be sending your prescription to your pharmacy right away, so you should be able to pick it up this afternoon.’ Gavin thanked her as he left.

Later that day, Gavin stopped by Maplewood Pharmacy to pick up his prescription. There were a couple of branches of some of the large chains nearby, but Gavin liked the idea of supporting small businesses. He also liked Shelly and Jeff Babbage, who owned the place. Besides, it was the sort of old-fashioned place that appealed to him. They’d been there forever, it seemed.

Gavin gave his name to the pharmacy cashier, and then looked over to see which Babbage was making up prescriptions. It was Shelly, and she raised her hand in a quick greeting when she saw him. He waved back and paid for his medicine. Shelly came up to the pickup window.
‘Any questions about your medication?’ she asked.
‘I don’t think so,’ Gavin responded.
‘Just be sure you take this with food. It can be a little hard on the stomach.’
‘Thanks, I will.’ Then he changed the subject. ‘You’ve been here for a while, haven’t you?’
‘Nearly forty years,’ Shelly answered as they stepped away from the pickup window. ‘I’m about ready to sell up and retire, but Jeff won’t even think about it. He’s determined to stay for as long as we can. I’ve tried and tried to get him to step back from the business, but he won’t even discuss it.’
‘Well, I’m glad you’re here.’
Shelly thanked him as he left.

When he got home, Gavin told Melissa what the doctor had said. ‘See?’ she pointed out, ‘I was right about your not needing surgery.’ She pretended to be smug, but he could hear the relief in her voice. He took one of his beta blockers after dinner and propped his feet up to watch some TV.

Three mornings later, Gavin woke up feeling nauseous. He went to work anyway, but by lunchtime, he felt sick enough that he decided to go home. When he got there, he changed into his sweats, texted Melissa, and went to bed. He felt just a little better by dinnertime, so she made him some soup. ‘Must have been something I ate yesterday,’ he told Melissa as they finished. ‘Well, whatever it was, I feel fine, so it wasn’t something we both had,’ she said.
‘I feel better now, but I’m still going to bed early,’ he decided. She agreed. He took his beta blocker and went back to bed.

Gavin felt well enough the next morning to go to work, but that evening, the nausea came back, worse than before. He was up most of the night with it. Finally, Melissa suggested they call the doctor. He was exhausted and sick, and it just wasn’t worth arguing with her. She was probably right, anyway. As soon as the doctor’s office opened, he called in and got an appointment for that afternoon.

‘And when did all this start?’ the doctor wanted to know.
‘About three days ago.’
‘Any other symptoms?’
‘A headache, cramps, and exhaustion.’
‘Sounds like it might be some sort of intestinal infection. Let’s do some tests and see what we come up with. In the meantime, I’ll give you a prescription for an antibiotic, so you can get started on it.’
‘Sounds good.’

Once again, Gavin found himself at Maplewood Pharmacy. ‘Back so soon?’ Shelly asked as she waited on him.
‘I have some kind of intestinal thing,’ he shook his head. ‘I’m falling apart in my old age.’
‘Not as old as I am, honey,’ she smiled. ‘Anyway, if it is an infection, this is what you need. Don’t forget to take it with a lot of water.’ Gavin promised he would, and headed for home, where he went straight to bed. Shelly watched him go, thinking about how many times she’d given instructions to patients.

Two days later, Gavin collapsed completely. The ambulance rushed him to the emergency room, but not quickly enough. When the results of the autopsy came through, the police took an interest, and the story made the news. Shelly was at home when she read what had happened. Her face went ashen, and she nearly dropped the cup of coffee she’d been holding.

‘What’s wrong, Shelly?’ Jeff asked. He stepped behind her to see what she was reading. ‘Oh, that’s a shame that guy died,’ he commented. ‘Is that what’s upsetting you?’
‘It’s just – he was a customer. It’s sad, that’s all.’
Jeff looked at the story again. ‘Cops are talking to the wife. I’ll betcha it was her. It’s almost always the spouse, isn’t it?’
Shelly nodded absently. ‘Yeah, probably was her.’

Jeff left the dining room and got ready to take the dog for a walk. Shelly covered her face with her hands and sank down a little in her chair. She hadn’t planned on this. All she wanted to do was make someone sick, so Jeff would have to close the pharmacy. That was all. She never meant for anyone to die. Slow tears dripped through her fingers as she tried to think what to do now.

12 thoughts on “Take As Directed”