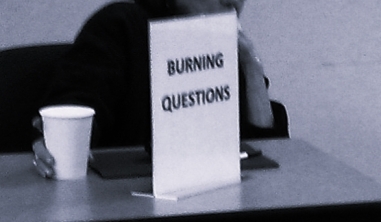 A well-written crime story gives the reader things to think about that go beyond who/how/whydunit. Larger questions invite the reader to think and reflect, and that can make a story memorable. Like most things about novels, it’s a balance, though. Readers usually want a story with a plot. It doesn’t have to be ‘action-packed,’ but it does have to move along, and too much philosophical discussion takes away from that. On the other hand, a thought-provoking story brings up some of the larger questions we ask and invites the reader to ponder them.

Agatha Christie raised philosophical questions in several of her stories. To take just one example, Mrs. McGinty’s Dead tells the story of the murder of a charwoman who lived in the village of Broadhinny. Everyone thinks that her lodger, James Bentley, killed her. In fact, he’s been convicted of the crime, and is due to be executed. But Superintendent Albert ‘Bert’ Spence doesn’t think Bentley is guilty, and he asks Hercule Poirot to investigate. One important clue comes in the form of a lurid article about women connected with famous crimes – a sort of ‘Where Are They Now?’ article. It seems that Mrs. McGinty had found that article and had quite an interest in it. It turns out that the article sparks quite a discussion among Broadhinny’s residents: just what is the role of nature vs nurture when it comes to crime? One character says, ‘Breeding shows,’ but is that really the case? What about environment? All of this forms an interesting thread in the story, but Christie doesn’t spend an inordinate amount of time discussing it; it just happens to come up in discussion.

Alexander McCall Smith’s No. 1 Ladies Detective Agency series features Mma Precious Ramatswe, Botswana’s only female private investigator (at least at first). Readers of the series will know that each novel features a few cases going on at the same time, and very often, a sub-plot about Mma Ramotswe, her friends, and her co-workers. The stories focus on the plots and the characters, and often the interplay among the characters. At the same time, though, McCall Smith does find ways to discuss philosophical issues. For example, in The Kalahari Typing School For Men, a successful civil engineer hires Mma Ramotswe to find the Tsolamosese family. It seems that, years earlier, when he was a student, he had stolen a radio from them. Now, he wants to make things right with them and with the young woman he was involved with, and whom he didn’t treat well. Mma Ramotswe agrees to take the case, and the story focuses on her search for the family, and on the characters. But it also takes up the larger question of atonement. Is it ever too late? Can a person really atone and move on? It’s an interesting discussion, although it doesn’t consume the book.

John Burdett’s Sonchai Jitpleecheep is a member of the Royal Thai Police. He is also an observant Buddhist who is trying to live the best life he can. His Buddhist beliefs are woven throughout the series, and they impact a lot of what he does. Here, for instance, is one of his comments on the death of a good friend of his in Bangkok 8:

‘We do not look at death the way you do…My closest colleagues grasp my arm, and one or two embrace me. No one says sorry. Would you be sorry about a sunset?

Although Buddhism comes through in the novels, Burdett doesn’t go on at great length about those beliefs. They come up from time to time as they are relevant, but the stories focus on the plots and the characters.

When you think of philosophy, you might not think first of Michael Connelly’s Harry Bosch. But his character does have depth, and he does his share of thinking. He has a belief system, too, that informs what he does. It’s clearly articulated in The Last Coyote. In that novel, Bosch has been ordered to undergo psychological evaluation and counseling. In one session, he’s talking to the counselor about a case he is investigating: the murder of a prostitute named Marjorie Lowe. When he’s asked if the case has affected him more than other cases, he says:

Bosch doesn’t usually wax philosophical, but he does reflect, and his belief system assumes the equality of all of the victims in each of his cases. And it raises the interesting question of just how equal the justice system is.

There’s also Jacqueline Winspear’s Maisie Dobbs. When we first meet her in Maisie Dobbs, she is starting her career as a private investigator. But she’s got an interesting background that goes beyond that. We learn that she began as a housemaid, until her employer and, later, sponsor, saw her intelligence and capacity for growth. After a stint as a nurse during WWI, she returned to England, where she picked up the threads of her life, and started her work as an investigator. Throughout those years, she’s been influenced by her mentor, Maurice Blanche, who is also a private investigator. Besides that, he has interests in psychology and philosophy, and Maisie has acquired them as well. As she works her cases, Maisie frequently considers deeper questions (e.g., Is there such a thing as redemption? What is society’s role in creating criminals?). Winspear doesn’t go on and on about philosophy, but it does play a role in her stories.

*NOTE: The title of this post is a line from Supertramp’s The Logical Song.

12 thoughts on “The Questions Run Too Deep*”