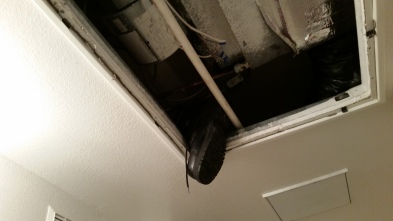 It almost always starts the same way. A closet door gets jammed, or a window needs resealing, or maybe someone wants their new TV hung up on the wall. Things like that. That’s when people call me or click on my website: Mike the Handyman. I’ve been in business twenty years, and I haven’t had any complaints yet. My tagline is ‘Mike can do it!,’ and that pretty much says it all. I always get five-star Yelps.

I get a lot of repeat business, too. In fact, I’m going over to finish a second job in a little while. I was there about two weeks ago, putting up new closet doors. The couple – they seemed really nice – was happy with the job. Their closet has an insulated crawlspace above it, and while I was working, I noticed that the door to the crawlspace wasn’t attached the right way. I said something about it and the wife – her name is Katie – said, ‘Yeah, Sean put it on the wrong way, but it still works.’
‘If you want, I could fix it for you.’
Sean started to say, ‘No, thanks,’ but Katie interrupted him. ‘It would be good to have it fixed,’ she said.
‘And from the looks of it, it wouldn’t cost you a lot,’ I added.
Sean knew when he was beat. ‘OK,’ he agreed.

I always throw a stepladder into the back of my truck. You never know when you’re going to need one. I went out to get it, so I could get up close to that crawlspace door and measure it. When I got back to the house, I could hear them arguing. Sean was angry about something, and Katie was saying, ‘It’ll be fine! Don’t make a big deal about it!’ Whatever. I was there to put that crawlspace door on. I stamped on the porch, so they’d know I was coming back inside, and they stopped arguing.

I carried the stepladder to the closet and saw that there were some suitcases in the way. I started to move them, but Sean stepped in. ‘I’ll get them,’ he insisted. He pulled them out of the closet to make room for the ladder. What he hadn’t expected was that one of the suitcases was unzipped and the lid had come up a little, so I could see some of what was inside. It looked like those bricks that drugs come in – the ones that the drug dogs sniff out on those TV shows. I turned my head away really fast, and started climbing up the stepladder, so Sean wouldn’t know that I’d seen those bricks. He glanced over, and I didn’t like the way he was looking at me, but I pretended not to see.

My palms were getting a little sweaty, so I wiped them on my jeans and pulled my measuring tape out of my pocket. I told myself to keep looking busy, and everything would be fine. While I was measuring, I heard Katie come into the room. ‘How’s it going?’ she asked me.

‘Oh, fine. I should only be a few more minutes.’ Trust me, I wanted to get out of there. I heard her and Sean murmuring to each other, but I couldn’t hear what they were saying. I finished up and wrote down the numbers I needed. Then, I climbed back down the ladder and dusted off my hands.

‘I’m done for now,’ I told Sean and Katie. ‘You need a different kind of latch, and I can order that for you. I’ll bring the right kind of door, too, so it fits better and blends in better.’
‘That’d be great,’ Sean said. Katie smiled and nodded. ‘What’s the cost going to be?’ she wanted to know.
‘It shouldn’t take long, and the parts aren’t expensive. I’d say you’re looking at about a hundred bucks.’
‘OK,’ Sean agreed, and we shook hands. We made plans for me to come back to finish the job, and I left.

For the next day or so, I wasn’t sure I wanted to go back. I’m not stupid. If they’re drug dealers, then they don’t want people poking around in their house, and I don’t want trouble. That was my thinking. But then, I started to think again. I mean, I’ll bet that stuff’s worth a lot of money. For a little bit, I wondered if I ought to, you know, borrow some of it and sell it myself. But I wouldn’t know where to start, and there are some crazy people in that business. No, that’s not for me. Then, I had another idea. I’ll bet they’ll pay a decent amount for me to keep my mouth shut. So now, my plan is to say something about it. Oh, not in a threatening way, but just make it clear I know what’s in those suitcases. That ought to get their interest. And I’ll get a bonus out of it. I’m not greedy or anything, but who doesn’t want a piece of the pie, right?

So, with that in mind, I called Sean and Katie this morning to confirm today’s visit. ‘Looking forward to it,’ Sean said. ‘But do you think you could come a little later? Like maybe at six?’
‘Yeah, sure, no problem. Six works.’
‘Great, thanks.’ Just before we hung up, I heard Sean tell Katie, ‘It’s all set. Tell Frank and Pete, OK?’

I had other jobs to do today, so I didn’t really think about it much, but then I started to wonder. What did Frank and Pete, whoever they are, have to do with me fixing that crawlspace door? Probably nothing, but I felt a little prickle up my scalp. Maybe I’d be better off dropping the whole thing. But then, what about my job? My reputation? And there’s the money. Besides, how do I know Sean or Katie saw me looking at those bricks? Maybe they didn’t? Yeah, I’m still going over there. I’ll do that job, I’ll tell them what I saw, and we’ll make a deal. That’s how it works, right? It’ll be fine.

4 thoughts on “Mike Can Do It”