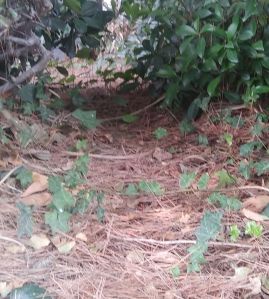 If you watch horror films, then you know that there are a few rules for staying alive and making it to the end of the film (e.g. don’t answer the telephone, don’t go down into that basement, don’t hold a séance, etc.). Well, it’s not much different in crime fiction. There are just certain things that crime fiction fans know will lead to trouble. One of them is going into the woods.

A walk in the woods can be a real tonic, especially at the change of season. And, of course, we need woods and forests for the ecosystem. But sometimes, it’s much safer to stay away. Just a quick look at crime fiction will make my point, I think.

In Colin Dexter’s The Way Through the Woods, for instance, Swedish tourist Karin Eriksson was on her way through Wytham Woods when she went missing. The only evidence that was found was her backpack and a copy of A Birdwatcher’s Guide, along with a list of bird species with some names checked off. A year later, her body still hasn’t been discovered. Inspector Morse and Sergeant Lewis take up the investigation when an anonymous tip in the form of a poem is sent to the police. When the police search the woods hinted at in the poem, they find a body, but it’s not Karin Ericksson; it’s a man. Now Morse and Lewis have two cases to solve: who is the dead man (and how and by whom was he killed); and, what happened to Karin Ericksoon?

Martha Grimes’ The Anodyne Necklace takes place mostly in the village of Littlebourne. When a local dog discovers a human finger bone, Inspector Richard Jury has to change his holiday travel plans and go to the village to investigate. Jury’s friend Melrose Plant (whom he was planning to visit) goes, too. Not long afterwards, the body of Dora Binns is discovered in a wood near Littlebourne. She worked as temporary secretary and had come to the village for a job interview, but never made it. It’s not spoiling the story to say that she’d been using the woods as a shortcut – something she shouldn’t have done. As Jury and Plant look into the matter, they find that several people are keeping some dark secrets.

The woods feature in Peter Robinson’s All the Colours of Darkness, too. The body of Mark Hardcastle, a set and costume designer for the Eastvale Amateur Dramatic Society, has been discovered in a woods near Eastvale. It looks at first as though Hardcastle committed suicide. But then, his partner Laurence Silburn is found dead. Detective Inspector (DI) Annie Cabot begins the investigation, but she knows better than to keep a case like this from her boss, Detective Chief Inspector (DCI) Alan Banks. So, even though Banks is away on a much-needed holiday, he’s contacted and returns to Eastvale to work on the case. It turns out that this case isn’t the murder/suicide case it seems to be on the surface. Instead, it’s a case involving international intrigue and espionage.

Inspector Reg Wexford and his team get a reminder of how dangerous the woods can be in Ruth Rendell’s Simisola. Wexford’s doctor, Raymond Akande, is concerned because his daughter Melanie hasn’t been home in a few days. He tells Wexford (who is one of his patients) about his worries, and Wexford agrees to ask some questions. At first he doesn’t think it’s anything serious; Melanie is twenty-two, and there are any number of reasons for which someone her age might take off for a few days. But more time goes by, and she doesn’t return. So, Wexford and his team look into the matter more thoroughly. Then, a body is discovered in a nearby wood. Wexford thinks it’s Melanie, but it turns out that this is another young woman. Now Wexford has two cases on his hands, and the key to both turns out to be the same place: the local employment bureau.

And then there’s Tana French’s In The Woods. One afternoon in the summer of 1984, three children went into the woods near the Irish town of Knocknaree. When they didn’t come back, their parents went looking for them, but couldn’t find them. By nightfall, the police were notified and a search began. Only one of the three children, Adam Ryan, was ever found. He remembered very little about what happened and couldn’t be much help to the police. Years later, the body of twelve-year-old Katy Devlin is found at an architectural dig near the same town. By now, Ryan has become a police detective, part of the Murder Squad that investigates Katy’s death. His police partner, Cassie Maddox, isn’t entirely convinced that he can be objective about this case because of his own past, but he insists that he can. So, the two get to work on the case. There are several explanations for what happened to Katy. For one thing, she has a dysfunctional family. For another, there’s conflict in the area about whether the architectural site should be preserved, or whether a new roadway should be permitted through that area. There is also the possibility that her death might be related to Ryan’s own personal trauma. There aren’t many child murders in that area, so the same person could be responsible for both tragedies. As the detectives work through the case, we get a sense of just how dangerous the woods can be.

There are a lot of other novels, too, in which secrets (and sometimes bodies) are found in the woods (I know, Louise Penny fans and fans of Martin Edward’s The Hanging Wood!). So, as you’re taking that delicious early-spring walk through the woods, or crunching on autumn leaves, do be careful. And don’t say I didn’t warn you…

*NOTE: The title of this post is a line from Stephen Sondheim’s Any Moment/Moments in the Woods.

12 thoughts on “Anything Can Happen in the Woods*”