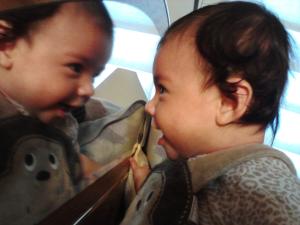 An excellent recent post from Bill at Mysteries and More From Saskatchewan has got me thinking about the importance of seeing people as individuals – as other humans. The book that featured in Bill’s post is Louise Penny’s The Madness of Crowds, which was released in August. I admit, I haven’t yet read this one, although I will. But Bill’s posts on the book (which you’ll want to read) mention one of the main characters, Abigail Robinson. She’s a statistician who believes in euthanasia, especially when it comes to those who present a burden to society. As such, she is focused on society in the larger sense, and not on individual people. And if you think about it, that has frightening implications. The question of how we see others comes up in a lot of crime fiction, actually, and it’s an important issue, because it has so many ramifications.

In Agatha Christie’s The Clocks, for instance, we are introduced to British secret agent Colin Lamb. He’s been following up on clues another agent left behind about a spy ring operating in the town of Crowdean. He’s walking along a particular street one day when a young woman, Sheila Webb, runs out of one of the houses, screaming about a dead man in the house. Lamb soon gets drawn into the case, and he consults Hercule Poirot about it. As the novel goes on, we follow both the murder case and the spy case, and we see how the two are connected (this is Agatha Christie, so not in the way you might expect). Along the way, Lamb comes to some conclusions about himself and about the spy business. He sees that, too often, people in that field stop thinking of others as human beings, and that’s dangerous. In the end, he says,

It’s an interesting look at how people see others.

In Vaseem Khan’s The Unexpected Inheritance of Inspector Chopra, we are introduced to Inspector Ashwin Chopra, who is about to retire on medical grounds from the Mumbai Police. He’s on his way to work on his last day when he sees a woman outside the building, protesting that the police aren’t investigating her son’s death. He agrees to hear the woman’s story even though he won’t be a police officer anymore after the end of the day. The woman tells him that her son, Santosh Achrekar, was found dead in a sewage ditch, apparently of drowning. He had a high level of alcohol in his blood, and it’s entirely possible that he was drunk, accidentally fell into the ditch, and drowned. His mother doesn’t think so, though, and wants the case solved. Chopra knows that police resources are limited, and that the larger ‘society’ might be better served in other ways. But he sees this woman and her son as human beings – as individuals. So, he agrees to see what he can do. It turns out that there was nothing accidental about this death.

Qiu Xiaolong’s Inspector Chen Cao series takes place mostly in the Shanghai of the late 1990s. The China in which he lives is very much controlled by the Party, although certain elements of capitalism are becoming accepted. One of the Party’s goals is social harmony, with all of society getting along without discord. And I think most of us would say that we like peace and harmony. But in several of the novels, we see how the Party’s goals and actions have real consequences for individual human beings. In more than one novel, Chen finds that those in charge would rather protect their images (and that of China) than allow a thorough investigation into certain crimes. Dissenters are seen as troublemakers or even traitors. In Enigma of China, for instance, Chen looks into the suicide (or was it?) of a high Party functionary who was accused of corruption. One part of the trail leads to the online investigative journalism group that broke the story about the dead man. On the one hand, the Party benefited from the information the group found. On the other, there is real danger in anything that hints at dissent or at embarrassing the Party or the country. The country’s perceived success is seen as more important than the well-being of the journalists.

And then there’s Geoffrey Robert’s The Alo Release. A Los Angeles-based company called Vestco is about to release a genetically modified seed coating that will, so the company claims, end world hunger. But the Millbrook Foundation, an environmental watchdog group, is suspicious of Vestco. They’ve been monitoring the company for some time, and they believe that the seed coating could be very dangerous. But Millbrook hasn’t been successful at stopping the release. So, Millbrook has decided to stop fighting Vestco. Jay Duggan, an environmental activist who was with Millbrook, has decided to retire and return to his native New Zealand. He invites Millbrook’s Science Director Dr. Catherine ‘Cat’ Taylor, and its IT director Matthew Liddell, to go with him and have a short visit to New Zealand before they go back to work. What they don’t know, though, is that a Vestco employee, Henry Beck, has been murdered, and they’re going to be framed for it. When they land in New Zealand, they soon learn that they’re considered international fugitives, and that Vestco will use whatever resources are necessary to catch them. If they’re to stay alive, they’ll have to outwit the police of two countries, and Vestco’s own ‘security forces.’ In this novel, we see that, while Vestco claims to be helping the larger society to eliminate hunger, it’s not considering the lives of the individuals who may be put at risk. And it’s certainly not considering the lives of the three people who are trying to stop the release of the seed coating.

Forgetting that members of society are people – human beings – has many dangerous consequences. Thanks, Bill, for making me think about this. Now, please treat yourself and visit Bill’s excellent blog. There, you’ll find quality reviews, insights, and interactions with authors.

*NOTE: The title of this post is a line from Magic!’s Rude.