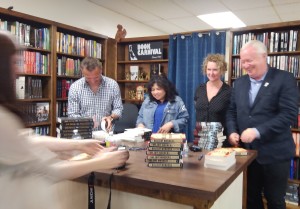 If you think about it, authors really need readers. On the one hand, people who love writing would write whether or not anyone read their work. But there’s nothing like the connection between authors and the people who read and appreciate their writing (Am I right, writers?). A good review means the world to a writer; a bad one can send that writer into a deep depression. Even well-established, best-selling authors understand how important readers are, and the truly great ones respect that and are good to their fans.

But that relationship can also be complex. Readers can sometimes feel a sort of ownership in a series, and they can be upset if something happens that they don’t like. Or, writers can shy away from contact with readers, which can put the reader off. It’s really interesting to see how this relationship plays out in real life, and in crime fiction.

Agatha Christie’s Ariadne Oliver writes popular detective novels. She’s got quite a following, too, and she’s much in demand. She’s grateful that people like her work (although Christie fans know she’s fed up with her protagonist, Sven Hjersen). But all that doesn’t mean she finds it easy to interact. Here’s what she says about it in Third Girl:

‘People say things to me — you know — how much they like my books, and how they’ve been longing to meet me — and it all makes me feel hot and bothered and rather silly. But I manage to cope more or less.’

In Kate Atkinson’s One Good Turn, we are introduced to mystery novelist Martin Canning. He’s written a very successful series, but he’s quite introverted, and not one to take opportunities to meet his readers. It’s not that he’s not grateful for them, but he likes a well-ordered, quiet existence, and meeting readers is hard for him to do. Still, his publicist insists on it, so in one plot thread of the novel, he agrees to appear on a panel at the Edinburgh Arts Festival. He does the best he can, but it’s clear that he’s not particularly comfortable interacting with readers, although he’s smart enough to know he ought to do that. Matters get worse when he happens to witness a car accident in which a blue Honda hits a silver Peugeot. The drivers get out of their cars, and the Honda driver starts to attack the Peugeot driver with a bat. Almost by instinct, Canning throws his computer case at the Honda driver – and ends up drawn into a case of fraud, murder, and more. Not an easy thing for an introverted author!

There’s an unusual and chilling depiction of interactions between an author and a fan in Stephen King’s Misery. In it, famous author Paul Sheldon gets into a car accident during a heavy snowstorm. He is rescued by Annie Wilkes, who takes him back to her home to look after him. At first, he’s very grateful to her for saving his life. And she encourages him to get back to work on the novel he’s writing, as she’s a fan of his work. But then, Annie decides she doesn’t like the way the story in the novel is playing out. And, as you can imagine, things are not going to go as planned for Paul Sheldon. It’s an interesting case of the way things can go very, very wrong between author and reader.

In Kalpana Swaminatham’s The Page 3 Murders, Dr. Hilla Driver has just inherited a very upmarket home, and wants to have a special housewarming party in conjunction with the celebration of her niece’s 18th birthday. The party is to be a ‘foodie’ weekend, with very special meals created by Hilla’s chef, Tarok Ghosh. Hilla’s well-connected, so she invites several celebrity guests, including famous novelist Alif Bey and his partner, activist Lola Lavina. One of the other guests is former Mumbai police detective Lalli, and Lalli’s niece (who is also the narrator). Trouble begins immediately with friction among members of the house party. Then, Tarok shows his real reason for insisting on a food-themed weekend. He creates a special hors d’oeuvre for each guest – a dish that hints that he knows a secret about every person. When he is found dead the next day, everyone becomes a suspect. Lalli and her niece work to find out who is responsible. Lalli’s niece is just getting started as a writer, so it’s quite a moment for her to be introduced to Alif Bey. But things don’t quite work out as she’d hoped:

‘He [Bey] took one look at me and decided I was not to his taste.

‘I never discuss my books,’ he snapped.’

Not the warm encouragement she’d hoped to get..

Deborah Johnson’s The Secret of Magic takes place just after World War II. Idealistic young attorney Regina Robichard is working for the NAACP in New York. Their office gets a letter from a reclusive writer named M.P. Calhoun.  The letter alleges that a Black man named Joe Howard Wilson was murdered, and it hints strongly that the case should be investigated. As it so happens, Calhoun wrote one of Robichard’s most beloved childhood books, so she’s intrigued. She decides to go to Mississippi, where the alleged murder took place, to look more closely at the Wilson case and see if there’s anything to what Calhoun has written, and, hopefully, to meet her childhood hero. As it turns out, Robichard learns that things are not always as they seem…

The relationship between writers and readers is fascinating, even arguably symbiotic.  And it’s interesting to see how it’s depicted in crime fiction. But in real life, let me reassure you: most authors (at least, most I know) really do appreciate readers. Readers keep writers going.

ps. The ‘photo is of a signing I had the privilege to attend. From left to right, that’s Jock Serong, Sulari Gentill, Emma Viskic, and Robert Gott. Check out their work if you haven’t!

*NOTE: The title of this post is a line from Jackson Browne’s The Load Out/Stay.

14 thoughts on “People, You’ve Got the Power Over What We Do*”