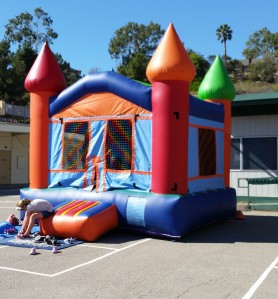 If you’ve ever lived in a small town, then you know that small towns often have a culture of getting together socially. It might be a church picnic, Bingo night, barbeque, or something else, but whatever it is, people in the town have a way of bonding at these events.

Events like a barbecue or a jumble sale are often good places to pick up on the local gossip and get to know the people in a place. So, it’s not surprising at all that we’d see these in crime fiction. They’re useful places to find out information, so fictional detectives find them quite useful. And they are part of what holds a town together.

In Agatha Christie’s Mrs. McGinty’s Dead, Hercule Poirot visits the village of Broadhinny at the request of Superintendent Albert ‘Bert’ Spence. It seems that one of the villagers, James Bentley, is due to be executed soon for the murder of his landlady, a local charwoman. Spence doesn’t believe that Bentley is guilty, and he doesn’t want an innocent man to go to prison. So, he asks Poirot to investigate, and Poirot agrees. If Bentley is innocent, then someone else killed Mrs. McGinty, and Poirot looks into the matter. One of the questions in the mystery is: who had access to the murder weapon? The answer to that has to do with a town tradition of the Bring and Buy, a community-wide jumble sale/rummage sale. All the locals go, and gossip is exchanged along with the sale items. The sales are held a few times a year, and Poirot tracks down who was at the most recent sales as he traces the murder weapon to the person who used it.

Arthur Upfield’s Death of a Swagman takes place in the small town of Merino, in rural Australia. One evening, there’s a dance and social at the local hall – something that happens periodically and that most of the locals attend. It’s one way in which the community bonds. The morning after the event, a stockman named George Kendall is found dead. Queensland police detective Napoleon ‘Bony’ Bonaparte travels to Merino to investigate, and he discovers that the motive for this murder is very unusual. There are other ways, too, in which the people of the town come together (particularly funerals), and it’s interesting to see how that happens.

Politicians know that people gather at barbecues, picnics, Trivia Nights, and other such events, and they take advantage of it to meet voters. We see an example of that in Gail Bowen’s Deadly Appearances. Androu ‘Andy’ Boychuk is an up-and-coming Saskatchewan politician who’s being spoken of as his party’s next leader. He plans to give a speech at a local community picnic, and he knows it’s an important opportunity. He takes the stage to speak but, shortly after he starts, he collapses and dies of what turns out to be poison. In the audience that day is his friend, political scientist Joanne Kilbourn. She’s devastated by Boychuk’s death, and she decides to deal with her grief by writing his biography. As she starts to look into Boychuck’s past, she slowly starts to put the pieces of the puzzle together. In the end, that search for information leads her to the murderer.

Mari Strachan’s The Earth Hums in B Flat is the story of twelve-year-old Gwenni Morgan. She’s growing up in a small Welsh town in the 1950’s – the sort of town where everyone knows everyone. There are social gatherings like the Singing Festival, that just about everyone attends, as much to learn the gossip as for any other reason. Gwenni herself is a bit of a dreamer, and not much of a one for social occasions, but she’s made to go along and help out with the food, etc. These things are an integral part of village life. Everything changes when Ifan Evans goes missing and is later found dead. The local police investigate, but Gwenni has questions of her own, and starts trying to find the answers. As she does, she learns a lot about some things happening in the town. She also learns some truths about herself. This is crime fiction, but it’s also a look at this small community and the events that bind the people together.

And then there’s Anthony Bidulka’s Going to Beautiful. Jake Hardy seems to have it all. He’s a successful Toronto-based celebrity chef, and his husband of thirty years, Eddie Kravets, is a successful clothing designer. They have a good relationship with their adult son, Connor. Then the unthinkable happens. Eddie dies in a tragic fall from the balcony of their luxury condominium. The police investigate and determine that Eddie could have been murdered. As you can imagine, Jake becomes a ‘person of interest;’ plenty of people think he is responsible. As he’s dealing with that, and beginning to process his grief, he goes back to a list that Eddie left: I’m Dead, Now What? Both men had written their last requests, so that each would know exactly what the other wanted. On Eddie’s list is the word ‘Beautiful.’ Eventually, Jake works out that Beautiful is the name of the small Saskatchewan town where Eddie grew up. Jake wants to find out about that part of Eddie’s life (he’s never even met Eddie’s parents), so he and his friend, Baz, travel from Toronto to Beautiful. Life in this small town is very different to Toronto. Everyone knows everyone, and the community gets together in several ways. There are informal coffee groups at Ming’s, a local restaurant. There are potluck meals and even a snowmobile poker rally. Gradually, Jake and Baz get to know the people of Beautiful, and they become part of the community. Jake also finds out the truth about Eddie’s death.

Potluck dinners, jumble sales, barbecues, game nights, they all can help form bonds within a community. And they’re often woven into the fabric of small-town life. Little wonder that we see them in crime fiction, too.

*NOTE: The title of this post is a line from Dream Academy’s Life in a Northern Town.

20 thoughts on “And the Children Drank Lemonade*”