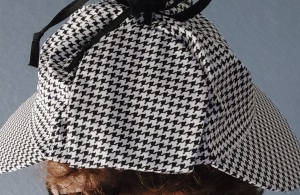 I don’t usually say a lot about my writing plans. After all, we all know what Robert Burns had to say about plans. But I’ve just begun the first draft (so it won’t be out very soon!) of a new Joel Williams novel. We’ll see how it develops as time goes by. The thing about Williams is, he’s not a police officer (although he was one) or a private investigator. So there are real limits to what he can realistically find out and do as a sleuth. It makes telling his stories a challenge, because both he and I like those stories to be credible.

We’re not the only ones to face this challenge, either. Contemporary crime fiction readers want their stories to have authenticity. Of course, there’s a little suspension of disbelief; it’s fiction, after all. But readers want credible characters who do credible things. It’s arguably less of a problem in Golden Age crime fiction, although the best of those stories do have a certain amount of credibility. For instance, Dorothy L. Sayers’ Lord Peter Wimsey is neither a police officer nor a private detective. But, his good friend (and, later, brother-in-law) is a police detective, so Wimsey has a connection to different cases. And even when Parker doesn’t play as central a role, Wimsey gets involved for clear reasons. For instance, in Strong Poison, he attends a murder trial, becomes smitten with the accused, and determines to clear her name so she’ll be free to marry him.

Anthony Berkeley’s Roger Sheringham is a writer who occasionally does newspaper articles. So, it makes sense that he would either be asked to follow up on a case or be curious enough to follow it on his own. Admittedly, he’s not exactly the most likeable of fictional sleuths, but his involvement in a case is usually more or less credible. He’s not alone. I’m sure you could name dozens of fictional sleuths who are journalists, and whose involvement in a case makes sense given that profession.

Many creators of today’s fictional amateur sleuths also find believable ways to get their sleuths involved in cases. One way is through the sleuth’s expertise. For example, Elly Griffiths’ Ruth Galloway is a forensic archaeologist with North Norfolk University. She doesn’t have police credentials or a PI license. But she is an expert in the identification of bones and other remains. So it makes sense and is credible that the police might seek out her help to solve cases in which bones are found.

That’s also the case with Simon Beckett’s Dr. David Hunter, who’s a forensic scientist. He has a deep knowledge of science, and he’s very good at what he does. So it’s not surprising that the police seek him out when they are working on complicated cases that require his expertise. He doesn’t go looking for cases; in fact, he’d rather work on his research and not get deeply involved. But that’s not how it works out most of the time…

It’s also believable that an amateur sleuth takes a personal interest in a case if it hits close to home. For example, Gail Bowen’s Joanne Kilbourn Shreve is a (now retired) political scientist and academician. She’s a naturally curious person, but she doesn’t get involved in sleuthing just out of curiosity. The Wandering Soul Murders begins when Joanne’s daughter Mieka finds the body of a young woman in a trash bin where she works. It makes sense that Mieka would call the police (which she does) and her mother (which she also does). There’s more to Joanne’s involvement in this particular novel, but that’s how it starts – in a credible way.

Donna Malane’s Diane Rowe is a missing person expert. The police sometimes reach out to her if her special skills are needed. For example, in Surrender, she works with the police to identify the remains of a man whose body is discovered in Rimituka State Forest.  But she also takes a personal interest in another case – the murder of her sister Niki. At the beginning of the novel, she finds out that the man responsible for Niki’s death has himself been killed. It turns out that he was hired by someone else to commit the crime, and now Diane wants to know who employed him. So she starts asking questions, and soon finds that someone will go to just about any length to keep the truth hidden.

Sometimes, amateur sleuths get involved when they’re framed for a crime. That’s what happens to Colin Conway’s Beau Smith. He’s a former motorcycle gang member who’s been placed in the FBI’s Federal Witness Protection Program in exchange for testifying against his fellow gang members. And in Cozy Up to Murder, he’s given a new identity and sent to a tourist town, Costa Buena, California. There, he runs Rockerfellas, a vintage music store. He wants to settle in and stay safe, but he ends up as the number one suspect when the owner of a competing music store is murdered. It isn’t so much that he’s eager solve crimes, but Beau wants to clear his own name. And he’s got lots of company, too. I’m sure you can think of several amateur sleuths who look into a crime if they’re suspected.

There are other ways, too, in which authors can credibly involve amateur sleuths in cases. It takes thought and planning, and it can be tricky. And what of Joel Williams? How will he get involved in his next investigation? Watch this space!

*NOTE: The title of this post is a line from Billy Joel’s Piano Man.