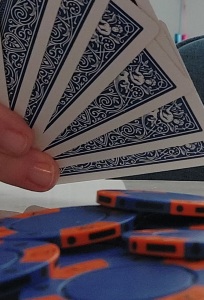 Most of us like at least a certain amount of safety. Some people are more adventurous than others, but a lot of us think about the risks involved in something before we actually decide to go through with it. For some people, though, it’s not interesting if it doesn’t involve a risk, even a serious risk. There’s a sort of adrenaline rush that comes with taking risks, and there are people who crave that rush. It’s one reason people participate in extreme sports, for instance. In crime fiction, those sorts of personalities can add to the suspense of a story. They can also make for interesting characters. And, of course, a risk could become an important plot point.

In Agatha Christie’s Taken at the Flood (AKA There is a Tide…), we are introduced to Lynn Marchmont. She’s recently been demobbed from WW II service with the Wrens, and is back home with her mother, Adela. Lynn’s happy to be home, but she soon finds that she misses the risky life she led with the Wrens. Things in her home village of Warmsley Vale are a little too dull for her. So, when she meets David Hunter, who was a daring war pilot, it’s not long before there are sparks between them. David, too, misses the risks he took in the war, and the feeling that he could lose it all. They both get caught up in a murder investigation after Lynn’s wealthy uncle, Gordon Cloade, dies without a will. A stranger calling himself Enoch Arden comes to town, claiming to have information relevant to the Cloade fortune. Not long after his arrival, he’s found dead, and Lynn’s family could be involved. Hercule Poirot has already heard about the Cloade family, and he investigates the killing. Running through this novel is the difficulty both Lynn and David have setting into post-war life, where there aren’t the risks and sudden changes that were a part of wartime service.

Raymond Chandler’s The Big Sleep sees private investigator Philip Marlowe hired by General Guy Sternwood to solve a family problem. It seems that a man named Arthur Geiger has sent Sternwood an extortion letter that refers to Sternwood’s daughter Carmen. Sternwood wants Marlowe to find Geiger and get him to stop his campaign. Marlowe agrees to the job and tracks Geiger down. When he does, though, he finds that Geiger’s been murdered. The only witness to the killing is Carmen, but she is either too dazed or too drugged to be of much help in getting answers. Marlowe gets her away from the scene right away, so she won’t be suspected, and he thinks that’s the end of this case. He’s wrong. Not long afterwards, the Sternwoods’ chauffer dies in what looks like suicide. The police find that Marlowe has been in contact with the Sternwoods, so he gets involved in their lives again. Along the way, Marlowe meets Carmen’s sister Vivian Regan. Like her sister, Vivian doesn’t mind taking risks. She’s a regular gambler who doesn’t feel comfortable with life unless she’s risking something. Even when she has the chance to ‘clean up her life,’ she doesn’t opt for safety. Neither does Carmen.

As Beryl Bainbridge’s Harriet Said opens, the unnamed narrator, who is thirteen, is awaiting the return of her fourteen-year-old friend Harriet from a holiday in Wales. Feeling a bit restless, she strikes up a friendship with Peter Biggs, a middle-aged man in an unhappy marriage. The two spend time together and before long, the narrator’s hormones start to surge. She doesn’t act on her feelings, though, as Harriet hasn’t returned. When Harriet finally comes back, she insists that the girls distance themselves from Biggs, and treat this experience as a sort of social experiment. Then, the two girls decide to do a little spying. They sneak over to the Biggs house and look in the window. They see something they aren’t meant to see, and things start spiraling out of control. The whole thing ends in tragedy, and a big part of the reason is the girls’ (especially Harriet’s) desire to take risks and ‘experience life.’

Steph Avery’s Our Trespasses is the story of teenage sisters Madeline ‘Midge’ and Bridget ‘Bridie’ Dolan. It’s 1966 South London, a time of Mods, Rockers, and lots of experimentation. The sisters have been raised in a conservative Roman Catholic home, but they long for a chance to try out this new world of music, fashion, and pop culture. Midge in particular wants some adventure in her life, and part of that adventure is taking some risks – preferably without her parents finding out. Bridie’s less of a risk-taker, but she loves the music and fashion, too. One Friday, the two girls wangle their mother’s permission to go dancing at the Palais Royale. The only stipulation is that their cousin Jimmy must take them and pick them up. That’s no problem for the girls, as they think Jimmy is ‘cool.’ The sisters go dancing, and all’s well at first. Then, a tragedy occurs – one that will impact both sisters for the rest of their lives. And it turns out that this tragedy is connected to the death of an unknown man whose body is found years later in an underground station. That enjoyment of risk, which isn’t uncommon among teens, plays an important role in the story.

There’s also Natsuo Kirino’s Real World, another story featuring teen characters. In this case, the characters are four Tokyo high school students: Toshiko Yamanaka, Kazuko Terauchi, Kiyomi ‘Yuzan’ Kaibara, and Kirari Higashiyama. One day, Toshiko hears some strange noises and screams coming from the house next door, where a boy named Ryo AKA ‘Worm’ lives. Not long after, she sees Ryo leaving the house in a hurry. He’s stolen Toshiko’s telephone and bicycle, so she has a vested interest in finding out where he is and what happened. Later, the police come to the Yamanaka house saying that the woman who lives next door (Ryo’s mother) has been killed. Toshiko doesn’t know at first whether she should implicate Ryo or not; she doesn’t even know where he is. But before long, he contacts her and her friends. Now, the four friends take a great risk not telling anyone they know where Ryo is. To that extent, they’re all risk-takers, especially as the tension builds and they almost enjoy living life on the wrong side of the law. Tashiko isn’t really happy at first with the whole situation, but her friends, one in particular, are. And that interest in risks and willingness to take them plays a big role in what happens as the police try to solve the case, and as Ryo goes on the run.

There are some people who enjoy that ‘jolt’ of taking a risk and having a lot to lose. That sort of person can get in real danger (or worse), but that’s how some people live, both in real life and in crime fiction. These are just a few examples. Your turn.

*NOTE: The title of this post is a line from Bob Seger’s You’ll Accomp’ny Me.