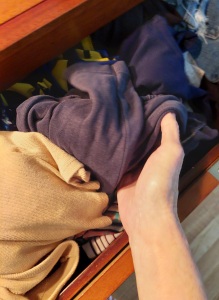 We all have a desire for at least a certain amount of privacy. Some people need more privacy than others, but we all need it to some extent. It can be awkward, too, to invade someone’s privacy, especially accidentally. That need to protect one’s own and others’ privacy adds challenges during a police investigation. People who are suspects or even ‘people of interest’ in a case often have their privacy compromised. The police are limited in terms of what they can and cannot search, and under what circumstances. But embarrassing questions come up, private things are discovered, and it all can make for a great deal of discomfort. And that can add some interesting layers to a crime story.

For instance, in Agatha Christie’s Hickory Dickory Dock, Hercule Poirot is asked to investigate some strange goings-on at a hostel for students. When one of the residents, Celia Austin, admits to being responsible for some of what’s happened, everyone thinks that the matter is settled. Then, Celia is murdered. It’s now clear that there was a lot more going on at the hostel than anyone thought. Inspector Sharpe and his team investigate, and Poirot works with them. As a part of that investigation, they examine the residents’ belongings and search their rooms. Some interesting (and in some cases, embarrassing) things come to light. So do some more suspicious things. No-one at the hostel is happy about the searches, least of all the hostel’s owner, Mrs. Nicoletis, who has her own secret. In the end, though, that loss of privacy does turn up some important information. You’re absolutely right, fans of After the Funeral.

Deborah Crombie’s In a Dark House starts with a suspicious fire in a Southwark warehouse. That in itself is bad enough, of course, but when one of the firefighters discovers the body of a woman, things quickly get more serious. Superintendent Duncan Kincaid and his partner, Detective Inspector (DI) Gemma James begin the search for the identity of the victim. One possibility is that it’s the body of Elaine Holland, who never showed up for work, and whose roommate hasn’t seen or heard from her. James and her team search Elaine’s belongings, including her underthings and other clothing, and it’s a bit awkward. It’s a fruitful search, though, as it shows that there’s a side to Elaine that nobody might have known. And that fact leads to the truth about what happened to her. As the story goes on, we learn how the fire is related to the case of the woman whose body is found in the warehouse.

Giles Blunt’s Forty Words For Sorrow features Detective John Cardinal of the Algonquin Bay (Ontario) Police Service. He is alerted when a body is discovered in a mine shaft on Windigo Island. He and his police partner, Detective Lise Delorme, begin their investigation. It soon turns out that the victim is thirteen-year-old Katie Pine, who went missing five months earlier. The official explanation was that she ran away from home, but Cardinal has never really believed that, and has followed up leads when he could. Now that they have Katie’s body, Cardinal and Delorme re-open the case and work to find out how and by whose hand she died. At one point, Cardinal faces the thankless task of visiting Katie’s mother Dorothy to tell her that they’ve found her daughter. It’s a terrible moment, and it’s only made worse because Cardinal has to search Katie’s things. It’s a necessary part of the investigation, but that doesn’t make it much less of an invasion, especially for Dorothy Pine.

There’s a really serious question of how much privacy should be compromised in the ‘Nicci French’ team’s Blue Monday. In that novel, London psychologist Frieda Klein is working with a new client, Alan Dekker. Dekker is beset with anxiety and other problems, and they’ve impacted his marriage and his work. One day, he tells Klein of a dream he’s had, about having a son who looks like him. Dekker and his wife Carrie haven’t had any children and Dekker doesn’t want to adopt. He and Klein begin to work on his issues and find the connection between them and Dekker’s past (it turns out he was adopted). Then, four-year-old Matthew Faraday disappears. Detective Chief Inspector (DCI) Malcolm Karlsson and his team make a thorough search, but no leads turn up. The only similar case happened long ago, and concerned a young girl, so it doesn’t seem to be related to the Faraday case. When Klein hears about the disappearance, she begins to wonder whether there is a connection between that case and the things that Dekker has told her. She’s bound by confidentiality and that’s no small thing. At the same time, she believes that what she knows may be helpful. So she tells Karlsson, and they begin to work together. It’s an interesting question whether Dekker’s privacy is inappropriately violated here, especially considering he may have something to do with the boy’s disappearance.

Anthony Bidulka’s Going to Beautiful shows people even keep things private from their spouses. Toronto-based celebrity chef Jake Hardy seems to have it all. He’s been very successful financially, he has a loving husband, Eddie, and a son who’s happy and healthy. Everything falls apart one awful night when Eddie dies after a tragic fall from the balcony of their posh condominium. The police are called in, and it’s not long before they suspect that Eddie was murdered. Naturally, Jake comes in for his share of scrutiny, and that’s hard enough. But then, the gossip starts on social media, and some people find him guilty in the court of public opinion. As Jake is going over Eddie’s list of last wishes, he finds the cryptic word, Beautiful. Before long, he works out that it refers to the small town in Saskatchewan where Eddie grew up. Eddie had always kept that part of his life private, but Jake needs a break from everything. So he and his friend Baz travel to Beautiful so Jake can get a sense of what Eddie was like before they met. While he’s there, he learns a lot about Eddie that he’d never known. It’s difficult, but it also gives him a sense of closure. He also finds out who murdered Eddie and why.

Most of us take a certain amount of privacy for granted. But that doesn’t hold when it comes to a criminal investigation, especially if it’s murder. Clothes, possessions, online accounts, telephones, they’re all potentially subject to a search, and that can be awkward at best. It certainly doesn’t make an investigation easy.