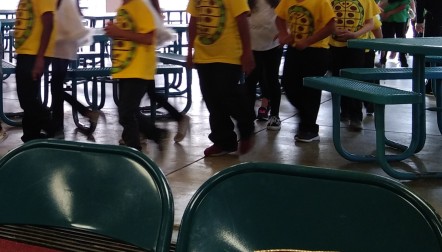 There are certain rules – etiquette, if you will – that people tend to follow when they interact. Those rules are usually unwritten, but they’re there. In fact, they’re important enough that if a person doesn’t follow them, it’s noticed and can be awkward at the least. As an example, if several people want to do the same thing at the same time (like buying a ticket), everyone gets a turn, and the rule is to wait until it’s your turn. To ‘cut in’ and take an earlier turn is considered very rude. Individual places and cultures have their own rules, too. For instance, in New Zealand, you thank the bus driver when you get off the bus. Where I live (and where I grew up, too), if you visit someone else’s home, you bring something with you (a bottle of wine, a box of sweets, something home-baked, etc.).

Those rules of etiquette play important roles in our lives; they tell us what to expect from ourselves and each other, and they make it a little easier to live on a crowded planet. They’re important in crime fiction, too. They add to the atmosphere, and they can help give a sense of time and place.

For instance, in Agatha Christie’s The Murder on the Links, Poirot and Captain Hastings travel to France to investigate the murder of Paul Renault. At one point, Poirot needs to go to Paris to follow a lead. Here’s how he takes his leave of Hastings:

‘Au revoir! You permit that I embrace you? Ah, no, I forget that it is not the English custom. Une poignée de main, alors.’

Poirot isn’t English, but he understands the etiquette of when and with whom to shake hands, and that hugs are not seen in the same way in all cultures.

In some cultures, there are other unwritten rules about physical contact. Many (not all) of them come from religious traditions and beliefs. For example, Zoë Ferraris’ novels feature Nayir ash-Sharqi who is a desert guide, and Katya Hijazi, who works in the medical examiner’s office. They live in Saudi Arabia, which has a strong Islamic tradition. A part of that tradition, for religious reasons, is that men and women who are not related do not touch. In fact, in the strictest form of this tradition, they don’t even speak. That custom – of avoiding physical contact between the genders – is woven into Ferraris’ stories, and is simply etiquette, even among those who are not deeply observant. In fact, if I may add a personal note, I work with several teachers whose students come from Muslim homes, and who’ve had to learn to politely greet those students’ parents without shaking hands. It takes a little effort to learn that, but it makes for much better rapport.

Fans of Tony Hillerman’s Jim Chee and Joe Leaphorn novels know that these two protagonists are members of the Navajo Tribal (now Nation) Police, and members of the Navajo Nation. While Chee follows the Navajo tradition more than Leaphorn does, both men know that it’s the Navajo custom to avoid touching someone who isn’t a close friend or a family member. This, too, comes from religious tradition. Etiquette in that culture dictates that you greet someone you don’t know courteously, but without physical contact. Chee and Leaphorn also know that, in that culture, you don’t knock on someone’s door to be invited in. You announce your presence from outside, usually by calling out or using a car horn. Then, when the occupant is ready to have you in, that person comes to the door or steps outside and welcomes you.

Hideo Yokoyama’s Six Four, which takes place in Japan, tells the story of Yoshinobu Mikami, a former police inspector who now works for the police in their Media Relations division. Fourteen years before the events in the story, he was involved in the investigation of the disappearance and murder of Shoko Amamiya. The case was never solved, and it remains a black mark on the police department, and a source of shame. Then, when the police commissioner suddenly decides to pay a visit to the bereaved family, the case comes up again. Mikami’s looking into the matter when he spots something unusual – an anomaly. This leads him to re-visit the case, and it opens a lot of old wounds (to say nothing of the danger in which it puts him). At one point, Mikami himself visits Shoko’s father. As part of the etiquette he follows, he asks (and gets) permission to pay ritual respect to Shoko. That privilege is not granted to everyone. In fact, Amimaya doesn’t want to have the commissioner in his home, and won’t grant him permission to pay respects. That turns out to play an important role in the novel.

There are also several unwritten rules of etiquette when someone visits. In many cultures, a visitor is offered refreshment. In fact, in several crime novels, the police make visits where they’re not offered anything, and that’s a very clear sign that they’re unwelcome and unwanted. In general, though, when crime-fictional police visit witnesses or even suspects, they’re offered tea, coffee, and sometimes something stronger. A few of Helene Tursten’s novels featuring Irene Huss include scenes where she makes such visits and is offered hospitality. It’s also there in Tove Alsterdal’s We Know You Remember. In that novel, police detective Eira Sjödin works to solve the murder of Sven Hagström. It’s connected with a twenty-three-year-old disappearance and presumed murder, and Eira uncovers several dark secrets as she works to find out the truth. It all involves several visits to different witnesses and ‘people of interest,’ and most of them include offers of coffee and biscuits. It’s just the unwritten rule: you put out something when someone visits.

Those unwritten rules of etiquette are an important part of human interaction. In fact, they’re so important that some of the finer points (like where utensils on a table setting belong) have been included in etiquette books. But the regular day-to-day unwritten rules (like thanking a bus driver) aren’t. Still, we know them and follow them. And so do crime-fictional characters.

*NOTE: The title of this post is a line from Queen’s Killer Queen.

10 thoughts on “Well Versed in Etiquette*”